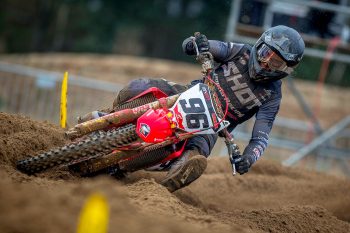 A medical assessment has revealed that Kyle Webster’s first turn incident at Lommel 1 has crushed his MXGP opportunity, being ruled out for the remainder of the season with further shoulder damage.

JM Honda Racing will welcome team regular Benoit Paturel back this weekend in Belgium, as Webster recovers from further injuries to his troublesome right shoulder.

The injury came as a surprise to the Western Australian, who was planning on attempting to line-up again in today’s round until doctors advised him that his season would instead come to an early conclusion.

“I went into the doctor’s office thinking that it wouldn’t be that bad,” Webster said. “Certainly, because it didn’t hurt all that much. To hear that my shoulder was banged up again was a bitter pill to swallow.

“It’s super-hard to have this happen two times in a row when I came here to fill-in and got the chance to race at the highest level. Of course it’s very disappointing for everyone, but this is also a part of motocross. I’m not going to dwell on it – we’ll stay positive and come back stronger!”

Team manager Jacky Martens added: “It’s almost unbelievable how much bad luck Kyle has had in such a short time span. His riding was looking better and better in preparation for Lommel, to say this is a bummer is a huge understatement! The hardest part of all is that he won’t be able to show what he’s capable of in the world championship this season.”

Webster had originally committed to the now-cancelled Australian Motocross Championship with Penrite Honda Racing, but travelled to Europe in September when the chance to fill-in for Paturel emerged.

He was injured in a German-based ADAC MX Masters race and then again in moto one on the weekend, which unfortunately denies him of the chance to showcase his ability at the highest levels of the sport this season.