Talented Western Australian Kyle Webster has been called into the JM Honda Racing team as a fill-in rider during the latter rounds of MXGP this season and, after recovering from a KO and shoulder injury at the German MX Masters a few weeks ago, lined up for his first MXGP race at Lommel on Sunday. A major crash at the start of the opening race set the tone for Webster’s weekend, but MotoOnline caught up with him to get his take on his European experience so far. It definitely wasn’t the best! I knew qualifying would be a struggle as haven’t raced in such a long time, due to the cancelled races at home and I was still recovering from a crash at the German MX Masters a few weeks beforehand. The day was a struggle and the gnarly track didn’t help my cause. My aim was to just get through it and get a race under my belt, but it didn’t go to plan. I qualified 22nd, then in the opening race I got a good start, but people pushed wide in the 90-degree first turn and I got hit on the side and got sent headfirst over the berm. I landed on my neck and back and my bike was broken, so I couldn’t race that one. I wasn’t sure if I was going to line up for the second race as I was pretty sore, but thought I’d give it a go. On the first lap someone jumped into the side of someone who hit me and I went down again. I got back on the bike and did some laps then pushed the front end in a turn and jarred my neck so badly again, I couldn’t physically move my head. I really wish I’d been at 100 percent like I was when I came over here – I pushed hard to get my shoulder good enough to ride on Sunday, but in hindsight I’m not sure if it was good enough to race.

Lommel would have to be the toughest track in the world and it gets so gnarly during the day. Coming from WA, I normally love racing in the sand, but this was something else. They brought in a lot of sand, dumped it on top of the existing track and built big rollers, singles and jumps out of it. I was talking with Jett Lawrence the other day and we were talking about how it’s so hard to describe the track to people who haven’t been there. The sand is super-deep, but it gets these hard, slippery bumps that develop and it’s just hard work the whole time.

Getting the MXGP call-up…

The JM Honda Racing team was looking for a fill-in rider after Benoit [Paturel] got hurt at Kegums, so Yarrive Konsky sent some emails through Honda and they were keen. There was no racing happening at home, so Yarrive had no issues with me coming over here and having a crack. The whole process was actually surprisingly simple, I’d heard some crazy stories from people who’d had to wait three months to get a travel exemption approved, but I received mine the next day. The team was still at Latvia when I arrived, so I spent the first week with one mechanic, riding and recovering from the jetlag, before a full week of testing leading up to the German MX Masters. 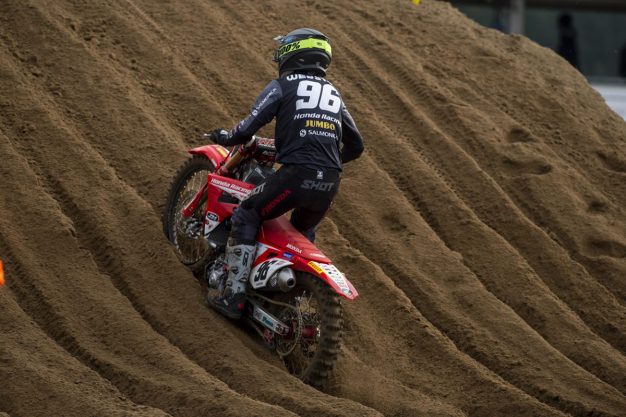 Crashing at the ADAC MX Masters…

That was a real bummer and I don’t remember much of what happened. I came into the first turn of the opening race, someone hit my front wheel and I went down. A rider ran over my neck and shoulder, so I was knocked out for a fair while. I remember coming into the first turn, then I remember waking up in the ambulance on the way to hospital. They put me into the trauma unit with six doctors ready to go as soon as I arrived, but fortunately the scans revealed I hadn’t broken anything in my neck and I’d only cracked my shoulder. For how serious the situation was, I was quite lucky.

The rest of the MXGP championship…

The aim is to try and get back behind the gate again on Wednesday for the second round at Lommel. I saw two physios this morning, I’m seeing one this afternoon and one tomorrow, who are all working on my shoulder, back and neck as it’s locked up so tight. I’m doing as much as I possibly can to be as close to 100 percent as possible for Wednesday. I’d love to race properly and finish a full day of racing, because things definitely haven’t gone to plan and I need to build towards that. It’s been a bad run so far, but the MXGPs is definitely where I want to be. I’d love to come back and give it a proper crack in the future.