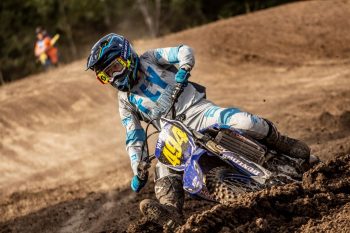 The past two weeks and have again proven successful for Yamaha Racing in Australia with multi race and championship wins across two states, as the 2020 continues to unfold.
QLD Women’s and Vets.

The central Queensland mining town of Gladstone hosted the 2020 Queensland Women’s and Vets Championship over the weekend and the warm, humid conditions made for a challenging event for the large contingent of riders on hand.

In the junior girls, it was all eyes on Charli Cannon as she was clearly the one to beat having recently finished third racing the boys at the state championship in Hervey Bay. But a hand injury slowed her progress and she had done no riding for a month leading up to the event so there were some questions marks about her fitness in the days prior.

But it mattered little, as she went on to dominate the day and claim the win in the 13-U16 years 85cc and the 13-U16 years Lites class, taking all six race wins. Cannon had not been on an 85 all year, but a last minute call to jump on her brother Jakes’s practice bike, paid dividends and she was able to walk away with the win and add more championships to her already impressive resume.

“My lead up to this race wasn’t good as I fell a while ago and the handlebar drove into my hand and caused some internal damage,” Cannon explains. “I wasn’t able to ride but I tried to keep up my off bike training as much as I could and I was able to get through the weekend with no problems.

“It was fun to get back on the 85 again, although I’m too big for it now. It kept me on the track and Dad busy in the pits all weekend and winning made it worth the effort.

“Thank you to Mum and Dad for their help again and also to Yamaha as well as the rest of my sponsors. We had a fun weekend in Gladstone and winning the state championship was another goal I wanted to achieve this year.”

In the Senior Women’s, it was Taylah McCutchen taking the win and like Cannon, dominated her division with three race wins from three starts. McCutchen, not only just turned senior after her 16th birthday but also just swapped over to Yamaha, is loving her YZ250F and it clearly showed on the weekend.

The win at Gladstone comes on the back of her first senior appearance at couple of weeks ago at the King of Capricorn event where she won the MX2 Support class against a field full of men.

“I put in a lot of effort over the last few weeks to prepare for this race so it’s awesome that it paid off and I was able to win the Queensland championship. The change to Yamaha has been good for me and I feel really comfortable on the YZ250F and its an awesome bike to ride.

Thank you to the club and the organisers for running the event, my family who support me 100% as well as the Yamalube Yamaha Team who assisted me with some parts in the lead up to this race,” McCutchen said.

Yamaha also won the 55 and Over Vets with YZ450F mounted Mal Dalton taking out the state championship with three race wins.

Coffs Harbour Transmoto
An all Yamaha team of Josh Green, Michael Driscoll, Blake Hollis and Dean Wattus took the overall teams’ victory at the Transmoto 8 hour event in Coffs Harbour. The recent dry spell left the course a little dusty, but the fast and free flowing layout kept riders happy and the Off Road Advantage Team dominated the day. Mounted on a range of Yamaha machinery, the awesome foursome enjoyed the weekend and the laid back nature of the event.

In addition to the team winning, Josh Green won individual honours as well as taking fastest lap on the day.

Yamaha Junior Racing
The Hutton brothers made it a 1-2 finish at the recent Queensland Off Road Championships. Competing in the 7-11 years 65, Harley Hutton took the final round victory and in turn secured the state championship while younger brother Drake slotted in behind him for second.

Sons of enduro royalty, Kirk Hutton, both boys are on their way to emulating Dad’s career and the YZ65 has been the perfect bike to kick kickstart their careers. They are now about 20 state championships behind Dad, but they have plenty of time and talent on their side.

Speaking of brothers, Ryder and Kayd Kingsford were back in action at the Nowra round of the East Coast Motocross Series in New South Wales. Ryder proved ultra-fast on his YZ250F, winning the opening two motos but a flat rear tyre in the final leg kept him from the podium while he battled hard in the 125cc division to finish fourth with 4-3-3 results.

Kayd had just returned from a broken wrist and not yet back up to full speed and fitness. He took 4-8-6 results in the 12-15 years 85cc class to finish fifth on the day but will be better for the hit-out and looking to get back on the podium at the next event.