Consistent Vialle stands atop MX2 podium at Flanders round of world championship. 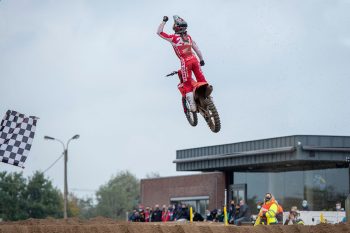 Defending world champion Tim Gajser has extended his lead with victory in the MXGP of Flanders at Lommel, as Tom Vialle used consistency to win the MX2 overall.

Gajser’s lead in the standings now sits at 48 points after he went 2-1 for the overall on Sunday, leading Gautier Paulin (Monster Energy Yamaha) and Jorge Prado (Red Bull KTM).

Moto one of the premier class was won by a resurgent Paulin over Gajser and Prado. It was Gajser who led much of the distance until a late fall enabled Paulin to win his first race since 2017.

The second encounter saw Team HRC’s Gajser this time control the moto for a pivotal win – his ninth of the season – ahead of Romain Febvre (Monster Energy Kawasaki) and Jeremy Seewer (Monster Energy Yamaha).

Fifth in the second moto was enough for Paulin to secure his first podium of the year, while early leader Prado’s fourth-place result in moto two put him onto the podium overall. In the points, it’s Gajser clear of Antonio Cairoli (Red Bull KTM), with Prado and Seewer tied for third.

Standing Construct GasGas rider Glenn Coldenhoff’s season came to a premature end after topping free practice, going down in qualifying and being diagnosed with compression fractures to three vertebrae.

The anticipated debut of Kyle Webster (JM Racing Honda) in MXGP was an eventful one, qualifying 22nd, but going down in the first turn of moto one and being ruled out. He only made five laps in moto two before retiring from the round. 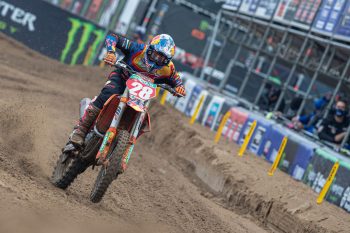 After finishing fourth in the opening outing, this time Jago Geerts (Monster Energy Yamaha) won moto two from Vialle and Roan Van De Moosdijk (F&H Kawasaki Racing). Overall, Vialle won his sixth overall of the year ahead of Geerts and Watson, who was P5 in moto two.

The MXGP World Championship will continue with round 14 of the season this Wednesday, 21 October, again at the notorious sand track of Lommel in Belgium. 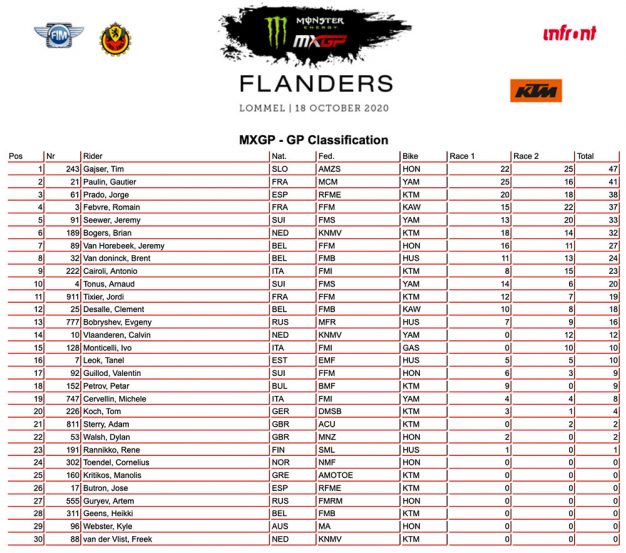 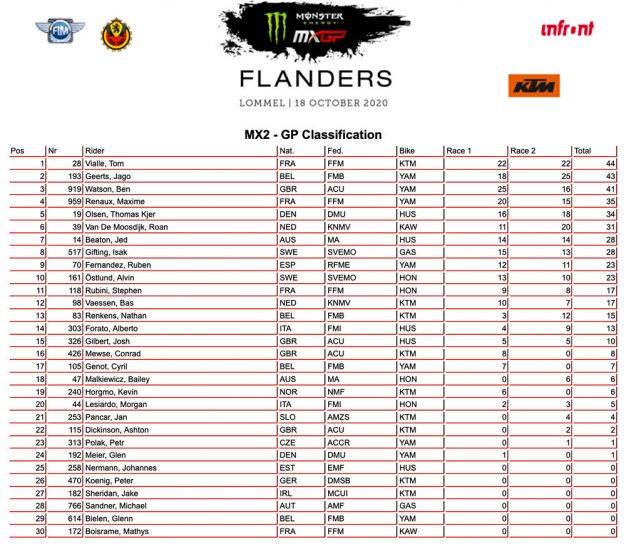