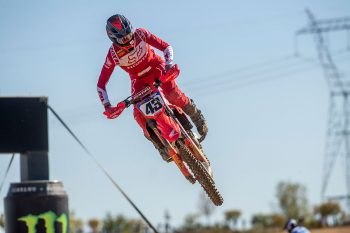 Queenslander Mitch Evans’ first season with Team HRC in the MXGP World Championship has come to an end after undergoing surgery on his fractured left wrist.

Evans has been hugely impressive riding the CRF450RW despite an injury-plagued year, recently re-signed to a multi-year contract with the works team.

In seeing a Milan-based specialist in Italy, it was also found that Evans had broken six ribs after he flat-landed a double in the opening moto of the Spanish grand prix last weekend.

“I’m disappointed to be missing these next races as I really felt like I was starting to show my best form,” Evans commented. “I’d been getting better and better since the restart and I was running up the front when the incident happened in Spain.

“Now, my focus is on getting fit and healthy and making sure that when I come back, I’ll be able to show everyone what I’m capable of. A big thanks to the team for all their support and to all the fans who have wished me well.”

HRC MXGP general manager Marcus Pereira de Freitas commented: “Unfortunately Mitch won’t be riding here, but we saw how well he came back from his shoulder injury, so we are all confident he’ll be back up to speed soon and once again battling with the best in this MXGP class.”

Six rounds remain in the 2020 MXGP World Championship at just two circuits, with the Lommel triple-header commencing this Sunday, 18 October, followed by Pietramurata in Italy from 1 November.