Grand prix veteran Desalle to retire at conclusion of 2020 season

Contract not to be renewed at Monster Energy Kawasaki team. 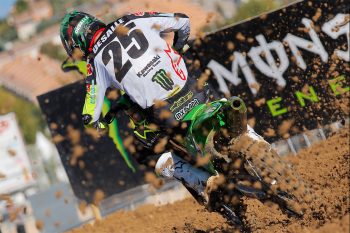 Monster Energy Kawasaki’s Clement Desalle will retire at the conclusion of the 2020 MXGP World Championship, the grand prix veteran has confirmed with six rounds remaining this season.

The 31-year-old Belgian currently sits eighth in the championship standings and was fifth overall in the Spanish GP last weekend, but says he is losing his enjoyment of competing at the world championship level.

“After 15 seasons of GP, 11 as factory rider, I’ll stop the grand prix of motocross at the end of this year,” Desalle said. “I’m thankful for what it has brought to me and I’m really happy I could be a professionel motocross rider in the world championship on a good level – a dream when I was little boy.

“This decision now because of a package of reasons, but I respect the rules I gave myself a long time ago. And to be honest, it’s coming more and more difficult to enjoy the riding and life in GP for me. The sure thing is that I’ll love forever riding a motocross bike. I could not achieve one dream to be world champion, but it’s like that – big thanks to everyone who supported me.”

According to MX Vice, the factory Kawasaki team had decided not to re-sign Desalle for 2021, which may have led to his decision to retire. He has achieved 23 grand prix victories over the span of a decade, finishing runner-up on three occasions in 2010, 2012 and 2013.