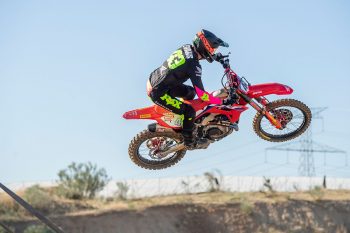 Australian rising talent Mitch Evans has been sidelined with injury woes again after breaking his wrist at the MXGP of Spain in Arroyomolinos.

The Team HRC rider already underwent shoulder surgery earlier in 2020 during the coronavirus stoppage, but will now take further time to recover.

It was shaping up to be another strong showing from the 21-year-old after he qualified third and started inside the top three during the opening encounter before an awkward landing off a jump caused the fracture of his left wrist.

“Unfortunately Mitch suffered a wrist injury in the first moto, when he was riding exceedingly well,” explained HRC MXGP general manager Marcus Pereira de Freitas. “He looked good in qualification and had started the race well, almost passing for the lead before settling into fourth place.

“We must wait until he sees a doctor in Italy before we know the timeframe for his return, but it is a real shame because he was really showing some good speed and we truly believed he could have challenged for podium today and in future rounds.”

With six rounds – a pair of triple-headers at Lommel and Pietramurata – remaining in 2020 over the next month, it’s uncertain if Evans will be able to return prior to the end of the season. He’s currently 11th in the world championship standings.