Final round victory of the season belongs to rookie standout Sexton. 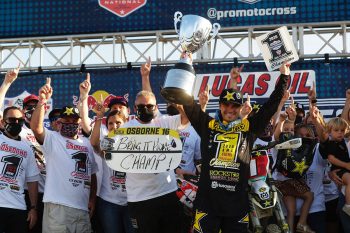 Osborne, 31, won Husqvarna’s first premier class crown in the US and the first of his career in a spectacular result for the pairing.

Today’s final round of the season in Pala was won by rookie Chase Sexton (Team Honda HRC) in a breakout result, going 3-1 for his maiden moto win and overall wins in the top ranks.

The late-season surge of defending champion Eli Tomac (Monster Energy Kawasaki) continued in moto one as he put on a charge to pass teammate Adam Cianciarulo in the closing minutes.

It was Marvin Musquin (Red Bull KTM) who led his share of laps at the beginning before Cianciarulo took over at the front, on track to win the race until Tomac stormed by. It was a Kawasaki 1-2 in the end, split by 3.416s, and Chase Sexton (Team Honda HRC) completed the podium after fending off an attack from teammate Christian Craig.

Moto two was all about the championship and a conservative Osborne did what he had to do to make it his and Husqvarna’s first 450MX title. While Sexton charged to breakthrough moto and overall wins at the front, Osborne crossed the line in seventh to seal the crown.

It was a Honda 1-2 at the front as Sexton topped Craig, while longtime leader Cianciarulo made a mistake and went down with seven minutes remaining as he was put under pressure by Sexton and costing him any chance of the overall.

For the round, Sexton was the winner ahead of Tomac and Cianciarulo, but it was all Osborne for the championship, carrying a 12-point advantage over Cianciarulo, with Tomac third at season’s end. 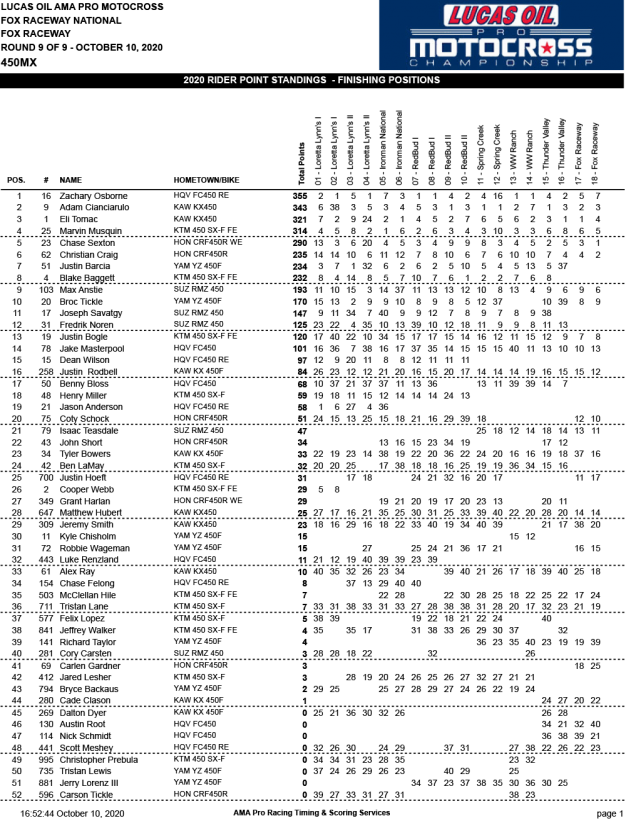