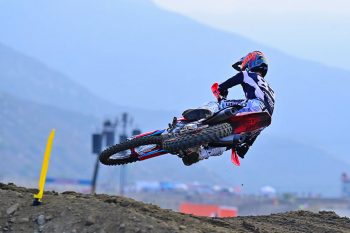 Teenage sensation Jett Lawrence has captured his first-career Lucas Oil Pro Motocross 250MX moto win at Fox Raceway in the final round of the 2020 season.

“I had to dig deep, especially when you have Dylan behind you,” Lawrence said from the podium. “He definitely wasn’t making it easy for me, but I had so much motivation, especially after my brother this morning, had some bad luck, so that was for him.

“I rode my heart out for him, myself, the team, especially as it’s going to be the last race for all of us with Geico Honda, so it’s really special to do it here at the last round, to finally get that win under the belt just puts you in a good mood for next year and hopefully I can continue on with it next season.”

It’s an emotion-charged day for the Factory Connection-operated Geico Honda organisation, which is understood to be closing its doors after losing the insurance company as title sponsor late this season.

Lawrence has been knocking on the door of a race win all season long in 250MX, his best result of second coming in moto one at WW Ranch’s seventh round in Florida last month. He’s yet to land on the podium overall.

Meanwhile, it’s been another luckless day and end to the season for elder brother Hunter Lawrence, the Geico Honda rider re-injuring his troublesome shoulder during practice and being ruled out of today’s finals.