Possibility of television to rely upon widespread support from the industry. 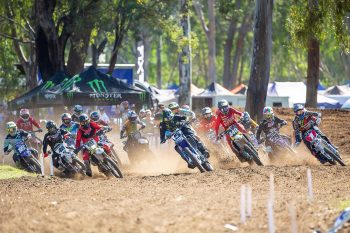 Information is beginning to surface regarding the 2021 Australian Motocross Championship, with Motorcycling Australia (MA) declaring that television won’t be introduced unless the wider industry backs such plans.

Now that the 2020 season has been shelved, MA is moving forward on its preparations for next year and that phase is expected to escalate during the final quarter of this year.

Ongoing speculation has suggested that the national governing body will re-introduce television to the series for the first time in a full decade from next season, however, it’s been revealed that it’s in no way a certainty unless industry support generates the required funding to commit to the proposed plan.

Former promoter Williams Event Management (WEM) established its own live-streaming service, NRGTV, that had been free for a number of years, but according to Doyle, streaming is almost as expensive as televising the product under a high-quality arrangement.

“We’re shifting our focus to 2021 now that this season is cancelled,” MA CEO Peter Doyle told MotoOnline.com.au. “TV is definitely something that we’re looking at and it’s very, very clear from the feedback that we’ve got from people within motocross that they want to see the series televised.

“Otherwise, is it something that we park to one side and try to get crowds back? You’re always going to get differing opinions. In regards to live-streaming, there’s not a huge difference in cost to streaming online or having it on TV. You’ve either got to go all in or not do it at all.”

Those comments are in contrast to MA’s broad television and streaming package of the Australian Superbike Championship (ASBK), which shares a number of its events with other series, such as the Superbike World Championship, Asia Road Racing Championship and – at least scheduled for this year – Supercars.

It’s understood that the 2021 AUS Motocross championship – no longer under the MX Nationals brand – will span nine rounds over seven separate events, which includes a pair of double-headers during the season. As many as 30 different venues have expressed interest in hosting at least one round next year under the series’ new management.

“We put out the announcement that we were seeking expressions of interest to run rounds of the championship and, all in all, there were 30 applications that we received from across the country,” confirmed Doyle. It’s not thought that an independent promoter will takeover the series, leaving MA to operate it internally.

Pending restrictions, the season will span from between March or April through August in a similar time-frame to when WEM was at the helm. The MX1 and MX2 categories will be joined by the newly-introduced MX3 development pathway.

It’s also been exposed that MA is assessing the possibility of hosting a multi-discipline event now that it is the rights-holder of motocross alongside the Australian Off-Road Championship (AORC) and ASBK – potentially including all three if a suitable venue arises.