Australian Hunter Lawrence delivered his best results of the 2020 Lucas Oil Pro Motocross Championship at Thunder Valley on the weekend, going 5-4 for fifth overall as he makes progress late in the season. At 20, the Geico Honda rider continues to be one of the most highly-rated rising talents in the sport and he spoke to the media following Colorado. Earning best result of the season…

It was definitely a better day today. Obviously, the year’s kind of sucked for me, but I wouldn’t say I had much races up the front like today in the season, just due to starts and stuff like that and my shoulder not being 100 percent there, but it was good. We had two pretty decent starts, just feeling more and more like myself, so hopefully can put in two good motos at Pala and we’ll see how we go.

It’s no different to [Jarrett] Frye and [Nate] Thrasher, making his first race pro and stuff, and the other guys coming up, like Stilez [Robertson]. It’s no different, just because it’s my brother – he’s just another racer. Sure, there’s a bar there for the Honda and stuff like that, knowing what the bike can achieve, but I wouldn’t say it’s changed much, just the fact there’s another Lawrence out there. That’s about it. I’m six months behind on, just the injuries I had in the off-season, so I’m kind of playing catch-up and then the shoulder injury at round two put me back a bit more, so just playing catch-up. It doesn’t change much, really, at the end of the day I’m not looking to race or beat my brother. It’s the guys that are on the podium every week, they’re the ones I want to beat.

It wasn’t until Dylan [Ferrandis] actually said at the podium what happened, he told me and filled me in, I was like, ‘I had no idea’. I couldn’t really say sorry, it wasn’t really my fault. [Hartranft] just kind of kept coming right, I was behind him for a few laps I think, and I was definitely faster and just wanted to get around him. On the inside before that I kind of went to the inside there and he jumped out of the rut, but we didn’t touch then and I got a little off balance and we kind of came close, but I wouldn’t say anything was dirty. I’m a pretty clean rider, for the most part. He kind of just kept riding further right, further right, further right and I’m like, ‘okay, you’ve made the pass, good job, buddy. Can we crack on, so no one passes us on the inside?’ Thankfully, Dylan wasn’t on the inside because he would have passed the pair of us – a bit of a clown move, to be honest. It wasn’t needed to try and whack my front wheel, so I’ll remember it. 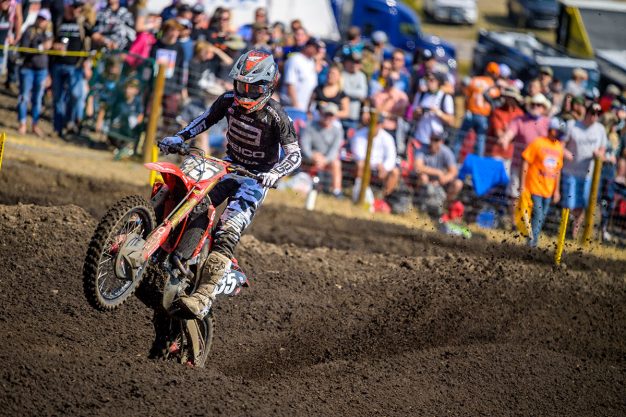 I was behind Shane [McElrath] so frickin’ long and I couldn’t pass him – that’s the widest Yamaha on the track. I finally got around him and then, because of how I passed him, it messed up both of our momentum for the uphill, so then of course Dylan got him and caught right up to me then, so he was on my arse. Then the old Honda didn’t quite make the uphill triple in them rollers, and of course, he did from the inside, then he got pretty close and managed to just get that real tight inside rut at the top of that hill, got right up beside me and scrubbed, and there was a lapper in the middle. I was kind of on the ropes there, but I tried to charge again and try and get him, but I had a few sketchy moments just pushing the limit. I tried to get him where I could, but just couldn’t make the pass the last two laps.

I’m good, mate. Just going to keep cracking on. Play a bit of golf, keep riding, keep training. That’s about it. Just going to keep working until I achieve my goals, pretty much. Body is good and stuff. We’re just doing the blood tests and bits and pieces just to make sure everything is good. Hopefully come out swinging in supercross, whenever that may be.