Seventh in Mantova MX2 moto two a career-best for Malkiewicz 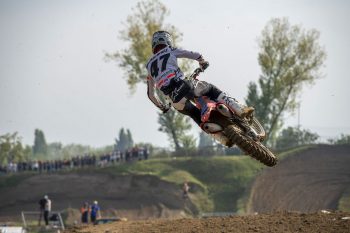 A seventh-place finish in moto two at Mantova 2 came as a career-best for MX2 World Championship newcomer Bailey Malkiewicz, the Australian impressing as he climbs the results order in Europe.

The Team Honda 114 Motorsports rider was 19th in the opening moto after an early crash, but managed to deliver a top 10 result later that afternoon on his way to 13th position overall.

“My qualifying wasn’t really what we wanted,” 18-year-old Malkiewicz recalled after qualifying in 18th position. “I was feeling good on the bike, but I couldn’t find a good lap to give us a good gate pick for the race.

“In the first race I had an okay start, but collided with another rider on the first lap and went down so I had to charge from last to 19th at the finish. I had an awesome start in race two and it was really nice to be up the front for once with a clear track. Seventh in the second moto was really good and I’m super-happy about that.”

Honda Off-Road Racing manager Gordon Crockard was impressed with what he saw from Malkiewicz at the Italian venue: “The standout performance for young Bailey Malkiewicz was superb, being seventh in race two. This on the back of a ride through the pack in the first race to score a 19th.”

The weekend wasn’t such a fortunate one for teammate and countryman Nathan Crawford, exiting the opening moto with a badly swollen knee injury, however the 114 Motorsports team has indicated that he could return as soon as this Sunday with the final stop of the Mantova triple-header.