At just 16 years old, WBR Yamaha’s Alex Larwood has amassed a pile of state and national motocross championships to his name, scheduled to embark on a professional career entering the 2020 season.

South Australia might be set to return of the glory days of the Metcalfe brothers, Kirk Gibbs and Luke Arbon as Larwood has made the huge step out of juniors and is ready to make waves in his first full year of seniors. The Kadina resident is anxious for the gates to drop and ready to establish himself in the big leagues of racing domestically.

In his last two years of juniors, Larwood racked up three Australian Junior Motocross Championships, a Rookies Cup, plus state titles in Victoria and SA. He has the runs on the board and, for his first professional start, he chose the Monster Energy AUS-X Open where he made his debut with WBR and put his YZ250F in the main event among a field full of experienced internationals. “The plan wasn’t actually to make that my first race in seniors as I was going to do the junior rounds in the Australian Supercross Championship and just wait until 2020 before I raced seniors,” said Larwood. “But, with the cancellation of the junior classes, we talked it over with both Yamaha and WBR and felt just jumping on it at the deep end would be a good option.

“I was as nervous as, the crowd was huge and I was lining up against guys I had watched on TV, so it was a bit intimating. But, my goal was to just get to the main event and gain as much experience as possible and I was able to do that, so I was happy.”

Larwood has been a product of the Yamaha Junior Racing program and been in the system since 2013. Working closely with the SA YJR team manager and former pro racer, Shane Metcalfe, the teenager has been able to build his speed and technique over the years despite not always having local competition to push him along.

“Shane has been great to me and my family over the years and dedicated so much of his time to helping us,” Larwood continued. “Because most of my competition lived interstate, it meant I had to work hard during the week as there was never anyone to gauge against on the weekends.

“I only really got to race guys like Jett Lawrence, Blake Fox or Levi Rogers a couple of times a year. Even for the last part of my junior years, we spent a bit of time racing in Victoria as well against better riders and on different tracks.” 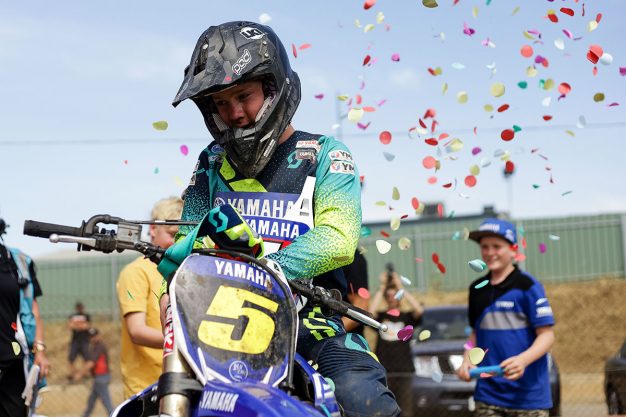 Larwood’s long-term relationship will continue with Yamaha in the revamped Australian Motocross Championship with the WBR Bulk Nutrients Yamaha team, making him a living example of Yamaha’s step-up program. Despite recently breaking his femur and collarbone, he is already focused on coming back stronger next year.

“At the 2019 AJMX, my family and I sat down with Travis [Whitten] from WBR and put things in place for 2020,” he reflected. “It was awesome to know that Yamaha and WBR were excited to continue and it was great to have the deal done so early and we could just focus on racing. I just wish we were racing now, but I understand what’s happening and we need to be patient.”