Husqvarna team 1-2 in MX2 at Lombardia from Olsen and Beaton. A maiden victory in the MXGP of Lombardia has boosted Jeremy Seewer into title contention, as Thomas Kjer Olsen and moto two winner Jed Beaton delivered a Husqvarna 1-2 in MX2.

Seewer won the first moto of the day ahead of Red Bull KTM duo Jorge Prado and Antonio Cairoli, later earning third in moto two to clinch the round.

The second moto was taken out by world champion Tim Gajser (Team HRC), who was eighth in moto one, from Glenn Coldenhoff (Standing Construct GasGas) and Seewer. Overall it was Seewer, Coldenhoff and Prado on the podium.

Seewer had initially crossed the finish in sixth, but penalties were applied to Prado, Prado, Gautier Paulin (Monster Energy Yamaha) and Romain Febvre (Monster Energy Kawasaki) for ‘not respecting a waved yellow flag’.

Australian Mitch Evans (Team HRC) was 13th overall at Mantova after he recorded 18-9 results. He struggled to get out of the gate in both races and crashed in the first turn of moto one, but will look to rebound on Wednesday.

Defending champion Gajser leads the point-standings following the ninth round of the season, now four points clear of nine-time world champion Cairoli, with Seewer a further 11 behind following his victory on Sunday. Rockstar Energy Husqvarna teammates Olsen and Beaton were first and second overall in MX2, with consistent results of 4-2 sealing the round for Olsen.

Beaton took seventh in the opening moto, but quickly worked his way into the lead during moto two and managed to keep Ben Watson (Monster Energy Yamaha) at bay for his first-career race victory. Watson completed the round podium in P3.

Of the other Australians in the field, Bailey Malkiewicz went 10-23 for 15th overall, with Team Honda 114 Motorsports teammate Nathan Crawford credited 21st overall after scoring points for 16th in moto two.

Moto one was won by world championship leader Tom Vialle (Red Bull KTM), but he had a troubled second outing for 14th and ended up seventh overall. Still, he leads the standings by 30 points.

The 2020 MXGP World Championship will continue this Wednesday, 30 September, with the MXGP of Citta di Mantova, which will mark the second of three rounds at the Italian circuit this week. 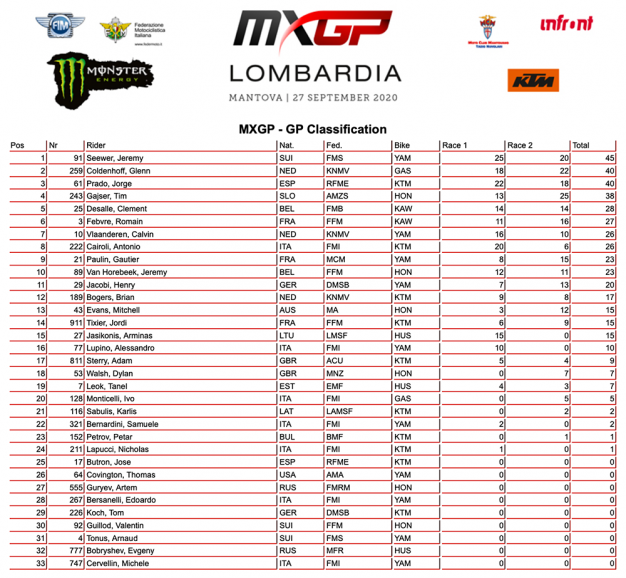 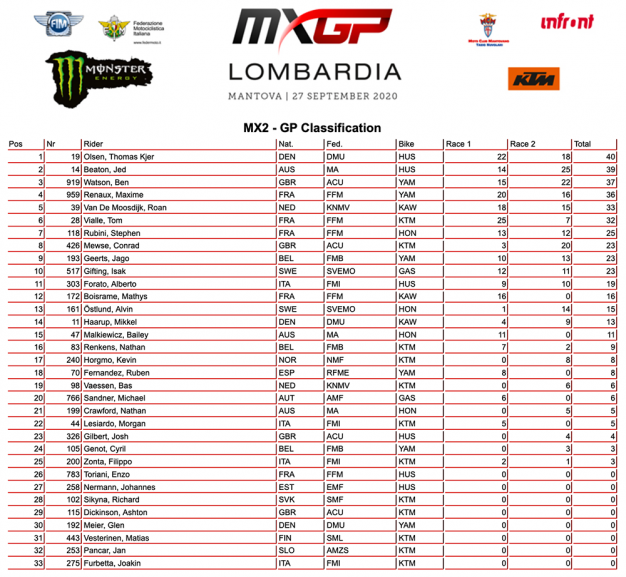