Questions and answers halfway through the 2020 outdoor season.

With five rounds down and four remaining in the 2020 Lucas Oil Pro Motocross Championship, it’s fair to say the delayed series has been worth the wait. We’ve seen tight racing and multiple winners across both the 450MX and 250MX classes, in addition to plenty of drama besides. Now that we’re at the mid-point of the championship, MotoOnline answers some of the big questions that are arising. A: You can never count the defending three-time champion out, but Tomac is facing a major uphill battle if he wants to claim his fourth-straight title. As you read this, he’s almost two races worth of points behind current red plate-holder Zach Osborne (Rockstar Energy Husqvarna) with just eight motos left. At this point, Tomac has to rely on positioning himself as far forward as possible in every race, Osborne to falter and other front-runners Marvin Musquin (Red Bull KTM) and Adam Cianciarulo (Monster Energy Kawasaki) to regularly finish behind him.

Q: Why is Zach Osborne so much faster this year?

A: It’s probably not a case of the championship leader being so much faster, but his ability to deliver consistent results week-in, week-out in a field that’s so stacked that most riders results are yo-yoing between 1-15. Osborne’s won three of the five overalls and four motos, but his worst race result so far has been a seventh at Ironman. Even last year Osborne was incredibly consistent, when he mightn’t have won any rounds, but he never finished below sixth. The 450 Class hasn’t seen that sort of consistency since the glory days of Ryan Dungey.

Q: Which rookie has been the biggest surprise out of Adam Cianciarulo and Chase Sexton?

A: Both of these emerging talents have enjoyed success in their first outdoor season. Team Honda HRC’s Sexton screamed out of the blocks to post the fastest qualifying times at Loretta Lynn’s 1 and secured an impressive second overall at RedBud 1. Meanwhile, Cianciarulo has his tail up after taking his first-ever moto win and round overall at RedBud 2, now leading his defending champion teammate Tomac in the standings. If we’re talking surprises, though, we’d have to say Sexton has been a bigger revelation, considering he came into the 450MX ranks as more of an unknown quantity outdoors. 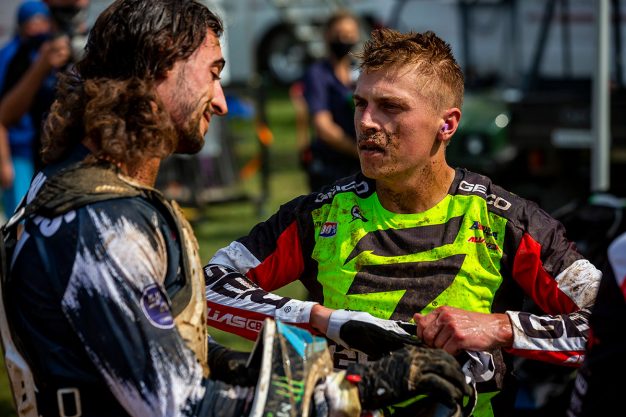 Q: Who has the upper hand in the 250MX title fight – Jeremy Martin or Dylan Ferrandis?

A: The scrap between Geico Honda’s Jeremy Martin and Monster Energy Star Racing Yamaha’s Dylan Ferrandis is reaching boiling point and is likely to only intensify in the second half of the championship. While Ferrandis has clearly been the fastest rider, more often than not average starts have forced him to battle through the pack. Conversely, J-Mart’s starts have tended to be much better and it’s placed him in a better position to pick up race wins and overalls. He’s won three of the five overalls – Ferrandis has only won one round – and holds a slender seven-point lead going into his home track at Millville this weekend. You’d like to think he’ll have the upper-hand at Spring Creek, which will really pile the pressure on Ferrandis for the remaining three rounds.

Q: What’s up with Hunter Lawrence? We expected him to challenge for the 250MX crown.

A: After he threatened for podiums and race wins last year, expectations were high that Geico Honda’s Lawrence would be a genuine championship contender in 2020. It hasn’t gone to script, though. The Australian dislocated his shoulder without crashing at the Loretta Lynn’s mud-fest, but still lined up for the following rounds at Ironman and RedBud. A mechanical DNF at Loretta Lynn’s 1 and consistently bad starts at every round have seen him having to try and push from the back of a stacked field. The results are telling in the points standings too, as he’s currently languishing in 18th place. The championship is well and truly out of reach, but we get the feeling that it’ll only take one great result for Lawrence to regain his mojo and reestablish himself as top three race threat.

Q: RedBud was weird without spectators. Will there be any other rounds without fans?

A: Thankfully, it doesn’t look like it. MX Sports Pro Racing announced earlier this week that they’re now selling tickets to the remaining four rounds at Millville, WW Ranch, Thunder Valley and Pala. However, numbers are limited to allow for state and local protocols around social distancing. Tickets for each round can be purchased via the Pro Motocross website.