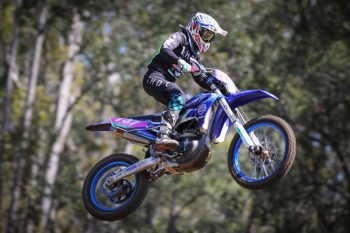 The weekend proved one of the busiest of the year for dirt bike enthusiasts with events in nearly every state, from motocross to off-road and Yamaha Junior Racing were again out in force.

Tasmania and Western Australia both contested rounds of their state motocross championship, New South Wales saw the resumption of the East Coast Motocross series, while South Australia and Queensland ran their respective rounds of their off road championship. It was hectic and we wouldn’t have it any other way.

Tasmania
Round four of the Tasmanian Motocross Championships hit the rural town of Smithton and lead up rain made the hillside track technical and challenging. Conditions started out wet, but by the end of the day, it was prime time and the riders loved the rutty layout.

Jay Jennings continued his good form, taking victory in the 10-12 years 65cc with a 1-1-2 performance. Jennings resumed his battle with rival, Cooper Ford and the pair duked out it all weekend with Jennings getting the better of his rival on this occasion.

The pair also went at it in the 9-11 years 85cc class only the roles were reversed with Ford taking the win and Jennings in second place.

Angus Pearce continued his impressive return to racing from injury and charged to a third place finish in the 13-15 years 125cc. Pearce won the first race of the day in convincing fashion and was on track to do the same in race two, only to fall within sight of the finish line. He finished with 1-3-3 results for the day and showed his recovery is back on track and he is looking to finish out the year strongly.

“A pretty positive day for both riders,” said team manager, Brody Jennings. “Angus is looking good on the bike again and just needs a little more fitness to be 100% but that will come as he gets more time to train and ride.

“For Jay, he rode the 65 really well and looked good but was just a bit off on the 85. It was a good weekend all round and we move onto the next round confident of keeping the upward trend,” Jennings ends.

Western Australia
The hard pack Chidlow circuit in WA hosted round two of their state motocross championships and marked a serious change of track conditions of round one where it was deep sand from start to finish.

With Jake Rumens sidelined with a thumb injury, support rider, Deegan Fort was drafted in to ride alongside Jake Turner in the YJR tent and together, the boys did a great job on track.

Turner made two trips to the podium on the weekend, taking third in both the 13-15 years 125cc and 13-15 years 250cc. The top three riders are evenly matched and produce some tight racing across both classes. Turner finished with 3-3-3 results in the 125 division and 3-2-3 on his 250 in a consistent and positive day for him.

With two rounds complete, he now sits in third place on both bikes, but less than 12 points separate the top three riders in both classes.

Fort had it all going on in the 7-9 years 65cc class and dominated the day taking three race wins from three starts and to move to the top of the championship table. In the 9-11 years 85cc, he also picked up a podium result on the back of some smart and safe riding.

“Both riders knew this round was important to get a good result and be right in the hunt of the championship, so to hit that goal was pleasing for them and us as a team,” explains Peter Strickland.

“Jake raced exceptionally well on a track that he doesn’t ride that often and kept fighting all the way to the finish line in each and every race.

“Deegan was in great form on his 65 and to not only win the day but take the championship lead was a great result but one that he must work hard to keep in the coming rounds,” Strickland said.

SA and QLD Off Road
South Australia and Queensland both had rounds of their off road championship and while it might not be the main aim for the SA riders, Wil Carpenter again showed his versatility by finishing on the podium with a third place finish in the 85cc division.

It has been a hectic two month period for the Carpenter family as they have flogged themselves to a standstill contesting motocross and off road events every week for the past nine weeks.

In the senior division it was Riley Graham taking the championship on his trusty WR450F making it his fourth SA Off Road Championship.

In Queensland, it was the sons of a gun who again took centre stage. Harley and Drake Hutton, sons of former champ, Kirk, raced to a 1-3 finish in the 7-11 years 65cc class and now sit 1-2 in the series.

Conditions were near perfect at the Conondale venue as a cool and overcast day combined with some light lead up rain kept dust to a minimum and traction to a maximum.

New South Wales
After a couple of false starts, racing was finally able to get back under way in New South Wales and the Maitland circuit in the Hunter Valley hosted round three of the popular East Coast MX. Yamaha had a versatile crew at the event with riders like up and coming star, Ryder Kingsford to established off road pros like Jeremy Carpentier, Jess Gardiner, Stefan Granquist and Emilie Karlsson all keen for a hit out after months of waiting.

Kingsford charged to a second place finish in the 13-15 years 125cc class with 1-2-2 results and the same finish on his YZ250F with 2-2-2 results. His starts were his downfall on the day but the young gun from Goulbourn was just excited to be back on the race-track and racing again.

In the senior divisions, it was Yamaha’s off road supported riders that flew the flag with Blake Hollis pulling down third in the 250cc Pro, Jeremy Carpentier taking fourth in the 450 Pro and the Women’s combo of Jess Gardiner and Emilie Karlsson finishing third and fourth respectively.