Sixth in Faenza a further sign of Evans improvement

Team HRC rookie back toward the front at Emilia Romagna MXGP. 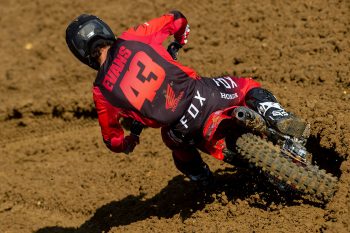 Mitch Evans continued his upwards trend of form by claiming sixth overall in the third-straight MXGP World Championship round at Faenza, the Team HRC newcomer showing significant signs of progress over the past week.

Following a mid-season shoulder operation, premier class rookie Evans has been impressive on return and went 4-8 for sixth overall at round eight of the season.

Coming into this triple-header, Evans had the goal of improving at each round and that is exactly what the Australian achieved by finishing sixth, which followed on from his eighth on Sunday and his seventh on Wednesday.

“I had another good day again and we’re still improving with sixth overall today,” Evans said. “It’s been better each time, so I’m happy with that. The first moto I didn’t get that great of a start and pushed really hard to come back to fourth, so it was a good moto, but I pretty much used all of my energy in that one.

“In the second moto I had a really good start, almost grabbing the holeshot, but I had nothing left in the tank, so it was just survival mode after that with me holding on as best I could. I’m happy that I was still able to keep improving and stay healthy and be moving onto the next GP in a couple of weeks at a track I really like.”

With a couple more weeks of training under his belt, and with the series heading to Mantova, a track where he won the Internazionali d’Italia in pre-season, he’ll be expecting to keep this momentum going for what is another triple-header of racing, beginning on 27 September.