First podium of the season ‘a long time coming’ for Beaton 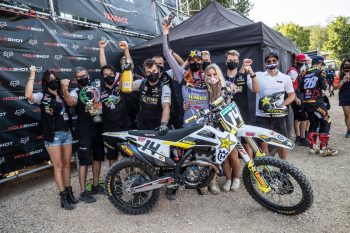 Australian Jed Beaton captured his first MX2 World Championship podium of the 2020 season at Faenza in the Grand Prix of Emilia Romagna, saying the result was ‘a long time coming’ post-race.

Beaton has been knocking on the door of a top three all year with Rockstar Energy Husqvarna and finally managed to do it via 4-3 finishes in Italy on Sunday.

It was a deserved result for the 22-year-old, overcoming a bad start in the afternoon’s second encounter to take his first top three result overall since the 2018 season.

“It’s been a long time coming and it’s great to finally get the monkey off my back and have a great first moto,” said an elated Beaton. “My starts weren’t the best today, but I made it work, especially in the second moto.

“I’m really happy to finally get onto the podium this season for myself and the team. It’s extra special because it’s my first podium result for Husqvarna.

“I’ve had a few second-place finishes, but the first moto has let me down, so it’s great to turn it around and get on the podium with two good results. My riding was good today, my bike was great so thanks to the team and we’ll build on this ahead of Mantova.”

With eight rounds now completed in the world championship during 2020, Beaton currently sits fourth in the MX2 point-standings ahead of the Mantova triple-header due to begin from 27 September.