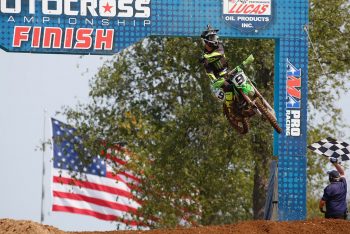 Monster Energy Kawasaki rookie Adam Cianciarulo broke through for his first 450MX round win of his career at round five of the Lucas Oil Pro Motocross Championship, at RedBud today.

Current championship points’ leader Zach Osborne (Rockstar Husqvarna Factory Racing) enjoyed a day near the front of the field in both races to extend his championship lead, while Rocky Mountain ATV MC KTM racer Blake Baggett took the field by storm to win the second moto.

In the opening 450 race, an ecstatic Monster Energy Kawasaki’s Adam Cianciarulo held off a hard charge from his team-mate and three-time champion Eli Tomac to claim his first-ever 450cc moto win in the opening premier class race.

Cianciarulo led from wire to wire and managed a relatively comfortable 2-3 second lead for most of the race before Tomac piled on late pressure.

Cianciarulo remained composed to take a hard-fought win, while Red Bull KTM’s Marvin Musquin, who rebounded well from a hard pass from Justin Barcia (Monster Energy Yamaha) earlier in the race, rounded out the podium.

Osborne spent most of his race in second position, before losing spots to a hard-charging Tomac and Musquin late in the moto.

In the second moto, Cianciarulo again enjoyed a perfect jump out of the blocks and took off at the front of the pack, while behind him, Tomac, Barcia and Sexton were caught in a second-turn pile-up that left Tomac restarting from dead last.

Seperate errors in the same corner from Marvin Musquin and Joey Savagty saw Baggett jump from fifth to third behind Cianciarulo and Osborne and he took off after the frontrunners.

While enjoying a four-second lead at the midway point, Cianciaculo ran into the back lapped rider at the bottom of an off-camber turn and went down, allowing Osborne and Baggett both past.

Late in the race Baggett closed in on Osborne and made a clever pass for the lead, then checked out, leading by 13 seconds by the time he got to the checkered flag. Rockstar Energy Husqvarna Factory Racing’s RJ Hampshire posted consistent 2-3 results to win his second overall of the year at an action-packed round five of the Lucas Oil Pro Motocross Championship at RedBud, MI.

Despite a day of mixed fortunes that saw him finish fourth overall, championship leader Jeremy Martin (Geico Honda) has retained the championship lead heading into his home race at Millville.

Despite everything, Martin only gave up three points to his closest rival, Dylan Ferrandis (Monster Energy Star Racing Yamaha).

Teammates McElrath and Ty Masterpool spearheaded the pack through the first turn, while Martin and Ferrandis found themselves outside the top 10.

Ferrandis hunted down Martin, but at the midway mark both riders went down after Ferrandis tried to squeeze past entering the left-hander at the bottom of Larocco’s Leap.

The Frenchman remounted quickly, and, despite another high-side crash several laps later, would finish fifth. Martin however, failed to move forward and finished 11th.

Up front, Hampshire jumped to the lead after passing McElrath then capitalising on a mistake from leader Masterpool.

With two laps to go Hampshire also made a mistake and allowed McElrath back past for the lead and eventual win, while Australian teenager Jett Lawrence (Geico Honda) applied the pressure all the way to the checkered flag for a career-best third.

In the second moto, Martin rebounded to claim the win by a comfortable eight seconds.

Off the gate it was again Ty Masterpool who secured his second holeshot of the day, with Martin in second and Hampshire in third.

Ferrandis experienced a horror mid-pack start and had to grind his way through the field on his way to second place and second overall for the day.

Hunter Lawrence crashed into Hartranft early in the race, and had to retreat to the pits so the team could straighten out a bent gear shifter. He eventually finished 26th.

The sixth round of the Lucas Oil Pro Motocross Championship will be held at Millville MN on September 19. 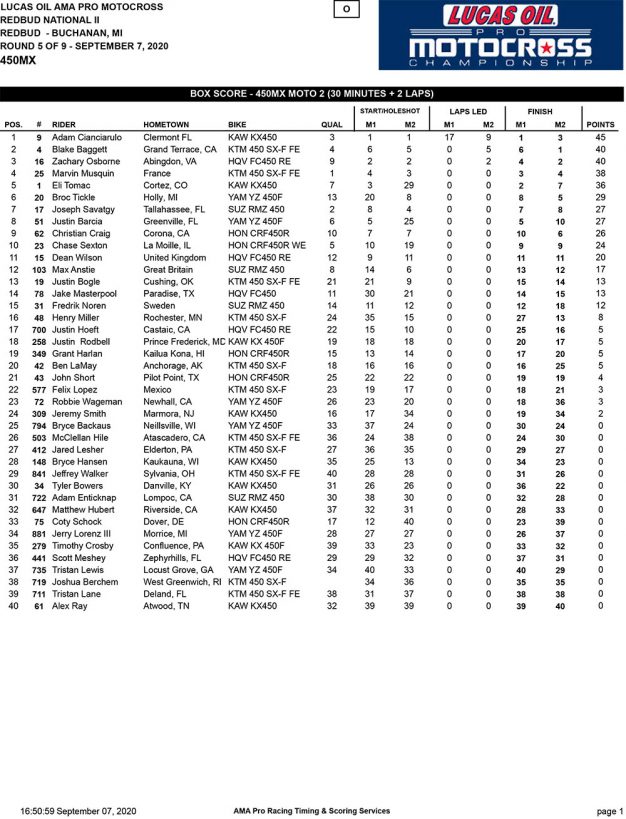