Geico Honda rider to try and ride this week before deciding on Ironman. 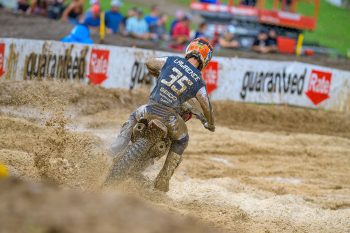 250MX contender Hunter Lawrence has avoided any ‘major damage’ to his shoulder after dislocating it at Loretta Lynn’s 2, according to a report from the Geico Honda team.

Lawrence exited the opening moto at round two of the 2020 Lucas Oil Pro Motocross Championship and didn’t return for the second outing.

After qualifying in eighth position, the Australian suffered the shoulder dislocation – what side is yet to be confirmed – while circulating inside the top five during the early laps of moto one.

Lawrence sat out the afternoon, but further evaluation this week has indicated that he escaped further injury and will attempt to ride prior to round three at Ironman Raceway this Saturday.

“Hunter popped his shoulder out of joint while running up front in moto one, which ended his day,” the team’s PR reported. “He had the shoulder looked at on Monday and found no major damage, leaving him day-to-day. Hunter will attempt to ride later in the week and will then determine his status for this weekend’s Ironman National in Indiana.”

It’s been a frustrating start to the season for the elder Lawrence brother, who after scoring multiple podiums as a rookie last season, was expected to challenge for the outdoor crown this year. He’s currently 25th in the standings, only scoring points for P14 in moto two at round one.