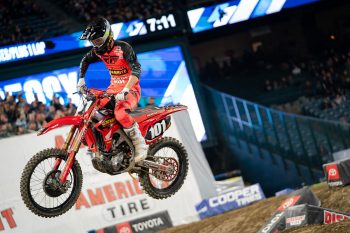 Team director Yarrive Konsky is proud of his team’s results; “this year marked the first time I went to Anaheim 1. When I was 15, I dreamt of traveling to America to race and that never eventuated. When I hit my 30’s, I told myself I would travel to watch A1 to watch the season opener and that never happened. Over the past few years, I have dreamt of running a team in America and this year, at 45 the dream came true. It puts a lot of things into perspective, especially with everything we are dealing with now. Dreams give you hope and I know these adverse challenges can make us stronger when we come out on the other side.”

Penrite Honda Racing represented Australia in the World Supercross Championship, where TV audiences exceed 6 million and trackside attendances are greater than some finals footy with more than 60,000 to 70,000 people attending individual rounds. One of the team’s proudest moments was hearing world renowned Australian commentator Leigh Diffey and America’s legend of Supercross, Ricky Carmichael talk about the team during the live broadcast.

The team was well received as they went on to achieve 8th and 9th in the Championship in their first year. Luke Clout and Mitchel Oldenburg finished on the podium in several heat races. Luke finished as high as 5th overall in Oakland. Both rider claimed several 10 overalls.

“It was certainly an eye-opening experience, I still pinch myself that we got it done! We learnt a lot and we are working hard on next year’s program.” Konsky added.

Following the conclusion of the World Supercross Championship; the team has been improving and developing on their Championship winning program closer to home in Australia.

Brett Metcalfe is racing his state Championships in preparation for the Australian Motocross season, he was 12 races from 12 starts and Luke Clout has returned to be ready once racing resumes. The team’s sole MX2 rider, Kyle Webster travelled to America earlier in the year to develop his bike and raced in New Zealand. The team isn’t ruling out the possibility of sending him overseas before the year is out.

“The start of this year was the best I have felt; the bike is strong and the team were ready to go, pre-season racing in New Zealand was the perfect preparation. Over the past 4 months I have been able to work on my race craft and my physical conditioning and I feel stronger, faster and better for it. Selfishly this time has been very rewarding, it has really given me the chance to improve as a racer, I am taking the positives out of the tough situation COVID has presented. We are looking at the possibility of racing overseas before the year is out. I know it’s going to be hard, but the team and I want to race,” Webster said.

The team has also been busy off track, raising money for those affected by the bushfire’s and for the Good Friday Appeal. They also were involved with ST Jude’s Supercross Charity Auction. Overall, the team, its partners and supporting riders contributed to raising over $40,000.

Bridgestone backed the team’s tyre challenge and the two winners were Jack Re and Daniel Milner. The boys will receive their tyres in the coming weeks.

The teams colouring in competition was a great hit, everyone who entered did an amazing job and their efforts were well appreciated. The team awarded Sadie Hoffmann a new pair of FLY Racing pants and a jersey for her design. Sadie will see her design on Brett Metcalfe’s bike at the final round of the South Australian titles. The team are also surprising Brett’s children. Their respective designs will be on either side of his Penrite Honda CRF450R for 1 of the 6 races. Following the weekend Metcalfe will sign some of the plastics and the team will send them to the Nunawading and District Motorcycle Club for next year’s 2021 Good Friday Appeal. Images will be released prior to the event next week.

COVID-19 is still lingering, and we understand everyone is battling through. Penrite Honda Racing wants to encourage everyone to use this time to work on themselves and work on their dreams. As soon as the boarder restrictions are lifted, we will be ready to race and we look forward to seeing our friends, fans and rivals.