Cause of moto one non-finish identified by Australian's Geico Honda team. 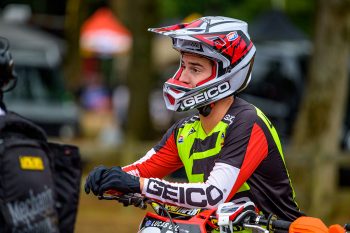 Finishing 17th overall wasn’t the beginning to Lucas Oil Pro Motocross that Hunter Lawrence was expecting at Loretta Lynn’s 1, struck with a technical issue in the opening turns of moto one.

The Geico Honda rider is tipped to be a challenger for the 250MX crown in 2020, however, 40-14 scores were a disappointing way to start his campaign on Saturday.

Lawrence qualified in 10th position and was looking to build on that result across the pair of afternoon races until – according to the team’s report – a first turn pile-up damaged his kill-switch and forced him out of contention.

“First moto really just wrecked our day with the DNF,” said Lawrence. “Being gate pick 40 for the second moto, I was going okay until [Mitchell] Harrison took me out. I then just pushed too hard for what the track conditions were and crashed again. Then it was survival mode – the track was really weird and just so funny. Like, you couldn’t push too hard on it and slower was almost faster. Looking to redeem myself big time this weekend.”

Round one of the outdoor series was better for a conservative Jett Lawrence to commence his first full season in Pro Motocross, delivering a 6-7 scorecard for sixth overall aboard his Geico Honda CRF250R.