After a historic, unprecedented week of intense racing, the MXGP World Championship has officially left the loam of Latvia behind with a trio of events completed. Three rounds of racing in the space of a week at the same track makes everything blur together, but we witnessed some pretty epic action along the way. Here are MotoOnline’s Top 10 standout moments. 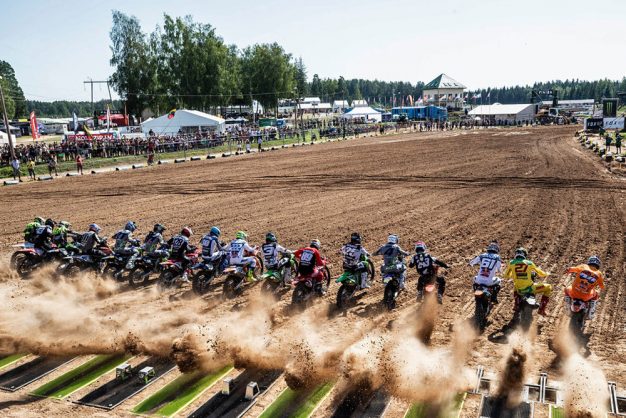 1. Herlings’ speed and crashes:
Even though he came into the Kegums rounds with the championship advantage, Dutchman Jeffrey Herlings has certainly established himself as the title favourite over the past week. To have cemented that, despite some uncharacteristic crashes and only one moto win from six races, says something of the speed Herlings is currently carrying and he still managed to extend his championship lead to 46 points over his nearest rival, Tim Gajser. He’s admitted he’s not riding as well as he’s supposed to and needs to get rid of some of the small mistakes and crashes – such as the spectacular heart-stopper he had in timed practice at Kegums 2 – if he wants to regain the MXGP championship.

2. Historic moment for GasGas:
Until the MXGP championship burst back into life, ‘Spanish’ manufacturer GasGas had only ever dreamed of making the winner’s circle at the World Motocross Championship. At Kegums 1, that dream became reality as their Dutch rider, Glenn Coldenhoff, took the Standing Construct GasGas Factory Racing team to second place in moto one, then went one better in moto two to claim a historic, breakthrough win. Remarkably, the victory came quite easily, as Coldenhoff grabbed the holeshot and led every lap to the chequered flag. Swiss rider Jeremy Seewer threw down a late challenge, but Coldenhoff focused on the job at hand and got it done.

3. Jasikonis vs Herlings vs Carioli:
The second MXGP race of Kegums 2 was arguably the best of the week for the twists and turns it threw up. The battle between Rockstar Husqvarna Factory Racing’s Arminus Jasikonis and Red Bull KTM Factory Racing power duo Herlings and Antonio Carioli was a cracker, especially early on as the trio exchanged some heated duals. Carioli led early, before his team-mate kept low over a couple of key jumps, braked late into a corner and stole the position. Not to be outdone, Jasikonis pulled a ludicrous move around the outside of Carioli in a right-hand sweeper and tried apply the blowtorch to Herlings, but couldn’t quite make it stick.

4. Late-moto plot twist:
Following on from point three above, things got wild at the end of the second MXGP moto at Kegums 2. With time almost up on the clock, Herlings lost control at the entrance of the sand rollers while leading and went down. While Jasikonis was in a different line and able to storm past for the race lead, Carioli came out of the corner and went down right before where his team-mate was already down as Herlings picked his bike up to turn around. The latter remounted and still finished second and Carioli fourth, but it would’ve been fascinating to be a fly on the wall in the team semi after that race. What all that did was seal 222 the overall.

5. MX2 intensifies:
If nothing else, the three outings in Latvia solidified the fierce rivalry that’s boiling away between Frenchman Tom Vialle and Jago Geerts. Since the 2020 championship commenced, the pair have been at each other’s throats and are the only two riders two have won MX2 races so far. Geerts (Monster Energy Yamaha) arguably had the speed advantage at Kegums, but a number of crashes during his six races meant he couldn’t capitalise on his pace, even when Vialle (Red Bull KTM) had to come from behind for a brace of fourths places at Kegums 2. Vialle now holds a slender eight-point advantage in the championship, but we suspect there are plenty more fireworks to come between them this year. 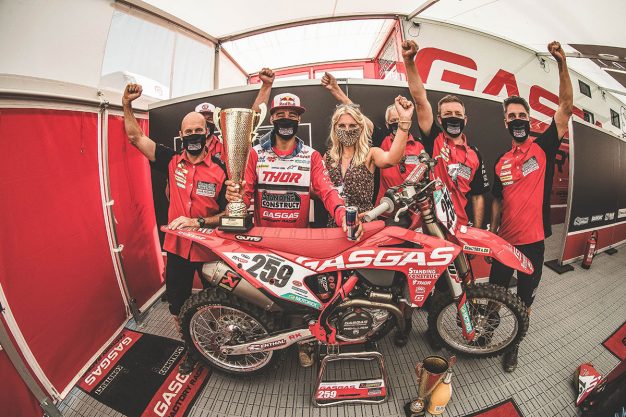 6. Holeshot or bust:
Typical of right-handed starts, the Latvian circuit’s first turn proved to be a challenging affair every time the gate dropped. The double-apexed 180 hairpin made and broke the hopes of many a rider over the three rounds, with incidents – including several big pile-ups – affecting the starts of seven out of 12 motos across the two fields. That’s a greater than 50 percent chance of ending up on the ground if a rider didn’t get the perfect jump. Over the course of the week most riders found themselves involved in a first-turn incident at some stage, including every Australian rider.

7. Inconsistency of Gajser:
Team HRC’s Gajser will be wishing he could have his past seven days back. The Slovenian entered the trio of rounds within striking distance of championship leader Herlings, but now finds himself 46 points adrift courtesy of a two DNFs and a bunch of crashes. The defending champion started on the right foot with a first moto win at Kegums 1, but crashed wildly through the rollers in the second moto while battling Caldenhoff. Three days later he crashed hard in the opening race and DNF’d, but rebounded to win the second moto. At Kegums 3, Gajser won the first race convincingly, but then crashed yet again in the final race, before his bike ground to a halt and he was forced to a mechanical non-finish.

8. Carioli keeps delivering:
The 34-year-old nine-time world champion continues to prove he’s a class act and the fact that he’s recently become a dad hasn’t slowed him down at all. At Kegums 2, Carioli claimed his 90th career overall victory with a near-flawless performance. The second race didn’t quite to go plan when he was inadvertently taken out by his team-mate Herlings, but his fourth-place was still enough to claim the round win. Incredibly, the legendary Italian has now won at least one GP every year since 2004.

9. Beaton slides:
Coming into the three Latvian rounds, Rockstar Energy Husqvarna Factory Racing’s Jed Beaton was sitting in a solid third overall after two rounds. Confidence was high and Australia was hoping we’d see an Australian stand on the podium at least once at Kegums. It didn’t come to fruition, though. Beaton started where he left off with a third place qualifying result at Kegums 1, but once the gate dropped he often found himself battling through the pack from bad starts and found himself in the dirt on several occasions. His second motos were all stronger (consistent sixths), but his mixed results have seen him slip to fifth in the championship hunt.

10. Improvement for Evans:
Although his results weren’t as good as he’d expected, Team HRC recruit Mitch Evans will take confidence that his results and pace improved over the week, especially as he continues to recover from a shoulder reconstruction and just a handful of weeks back in the saddle. After posting 19th overall at both Kegums 1 and 2, the final hit-out in the sand saw a much more promising display from the North Queenslander. Evans chalked up a 12th in the opening race then further improved in the final moto with a creditable ninth, for 10th overall. Despite everything he’s been through so far this year, Evans has only lost one position in the championship fight, from 11th to his current standing of 12th.