Ferrandis perfect for 250MX class double at opening round. 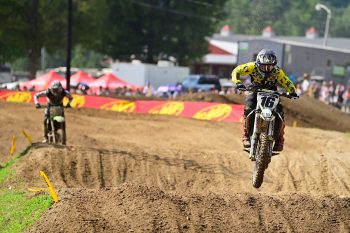 The opening premier class moto was controlled by Jason Anderson (Rockstar Energy Husqvarna) as he stormed to the front on lap one and delivered a 4.895s win.

Anderson led factory Husqvarna teammate Osborne, who pressed through the field from the back of the top 10 into the runner-up position. A hard-charging Justin Barcia (Monster Energy Yamaha) came from even further back to third, with Marvin Musquin (Red Bull KTM) fourth and teammate Cooper Webb fifth after circulating as high as second.

The holeshot belonged to Fredrik Noren (JGRMX Yoshimura Suzuki) alongside Savatgy, while another to put on an early attack was top qualifier Chase Sexton (Team Honda HRC), but he made an error while battling for the podium and wound up 13th.

Winning the second moto this afternoon at the ranch saw Osborne earn his first 450MX victory, overcoming a late challenge from Tomac to cross the line 3.605s ahead of the number one plate-holder and Sexton was third.

It was initially Cianciarulo who led the way only to crash out of contention with bike damage, handing Osborne the lead and that’s where he stayed.

Behind the top three came Baggett and Musquin, while opening race victor Anderson was among the top three early, only to gradually slide down the order later in the race to sixth.

Barcia recovered from an early fall for eighth ahead of Webb, Dean Wilson (Rockstar Energy Husqvarna) and Max Anstie (HEP Motorsports Suzuki). Overall via a 2-1 score, Osborne stood in the middle of the podium ahead of Anderson and Tomac. In 250MX, Ferrandis captured the first moto victory of the season with a commanding ride, hitting the front on lap one and then inching away from the field to a 19.802s advantage by the checkered flag.

He was followed by Jeremy Martin (Geico Honda) in second, with RJ Hampshire (Rockstar Energy Husqvarna) enjoying a strong return to racing in third, while the fast-starting Shane McElrath (Monster Energy Star Yamaha) crossed the line fourth and Alex Martin stormed to a top five.

Elsewhere, Hunter Lawrence (Geico Honda) went out on the opening back with a mechanical, while Monster Energy Pro Circuit Kawasaki replacement Mitchell Harrison had been inside the top five until he stalled and couldn’t restart, dropping down the order to 23rd.

Another win in moto two for Ferrandis sealed him the overall and early points-lead in the season, with the top three being the same as the opening outing as Hampshire was second, 13.199s in arrears and this time getting the better of Jeremy Martin in third.

In fact, the entire top five was identical, with early leader McElrath fourth and Alex Martin a solid fifth. Sixth was an improvement for McAdoo this time out, trailed by Jett Lawrence, Cooper, Harrison and Brandon Hartranft (TLD Red Bull KTM).

Ferrandis was sixth at the end of the opening lap, climbed into the top three by lap four and led from lap seven, going on to dominate for the second race in a row this afternoon. Overall it was Ferrandis atop the podium, joined by Hampshire and Jeremy Martin.

Jett Lawrence’s 6-7 scores resulted in sixth overall to begin his first full season outdoors, while brother Hunter Lawrence rebounded for 14th in moto two, putting him 17th for the weekend following that non-finish in the opening encounter.

The 2020 Lucas Oil Pro Motocross Championship will continue with round two of nine scheduled next Saturday, 22 August, once again at Loretta Lynn’s. 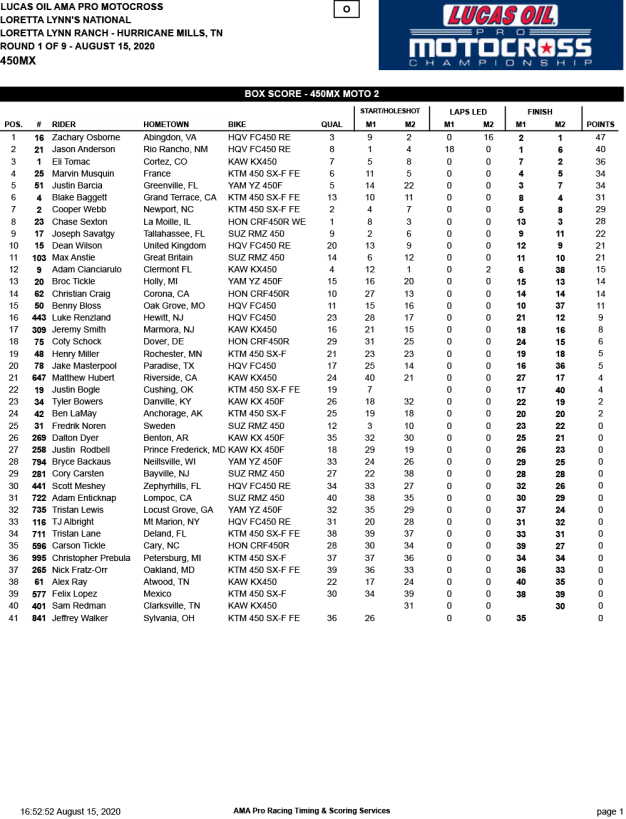 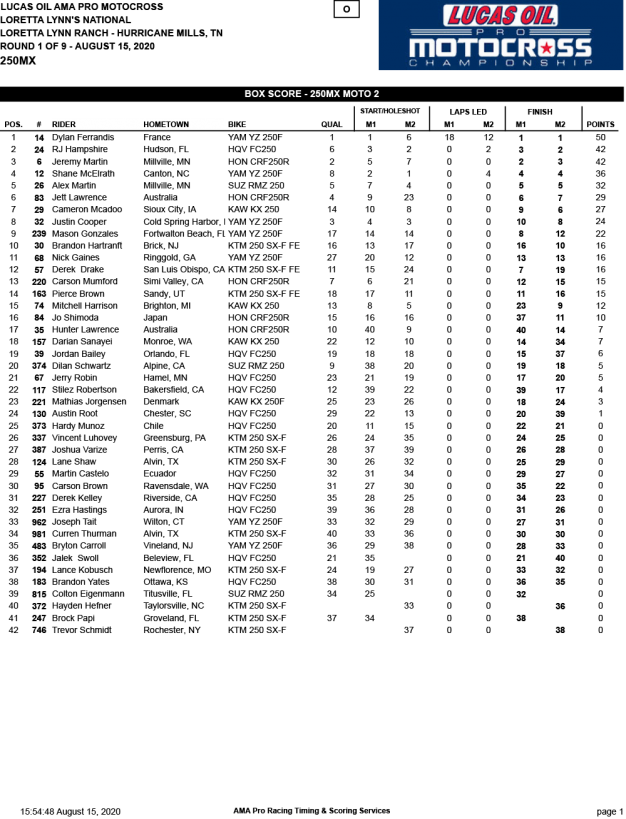