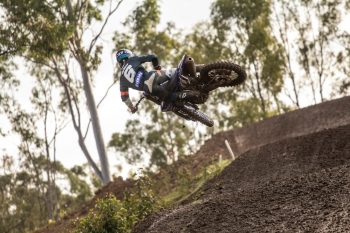 The past two weeks has seen racing continue across several states and Yamaha again bought the heat with success in Western Australia, South Australia and Queensland.

Last weekend, South Australia got their state motocross championships underway in perfect conditions at the Riverland Motocross club, Renmark and the new look team of Ryder Woodrow and Wil Carpenter kicked the season off in great fashion.

It was Woodrow’s debut event for the team and he instantly rewarded everyone for his selection by charging to a round victory in the 9-11 years 65cc class on his YZ65, and then returned to the podium in second place in the 9-11 years 85cc category.

Wil Carpenter joined in on the podium action when he claimed second in the 12-15 years 85cc class.

The SA team have also kept busy doing some off road races as well. The slight change of tack has kept the team on the track and the riders sharp during a very interrupted season.

“It was just good to be back at the track again and seeing some racing,” comments SA manager, Shane Metcalfe. “Both guys continued to work hard on their training during the Covid break and it showed in the results on the weekend.

“While we don’t have a lot of events to do, we will do everything we can, including off road, to keep the guys on track and give our sponsors the best exposure possible. We are at it again next week for round two of the championships and hopefully the good results can continue.”

WA also got their season back on track and the Kid of the Sand event at Pinjar Park. The two pronged attack of Jake Turner and Jake Rumens racked up some impressive results in their first major hit out of the year. Rumens charged to the win in the 12-15 years 85cc class with 2-2-1 results and showed speed and consistency on his YZ85.

Jake Tuner also finished up on the podium with a third place finish in the Junior Lites class taking third with 2-3-3 results in a confidence boosting day for the riders and team.

“The weekend was good way to get things going again with both riders riding well. Both had some close battles on the track in the respective classes and its hard to be upset when both guys are on the podium,” states Peter Strickland, WA team manager.

The third round of the Sunshine State Motocross Series hit the picture perfect hills of MX Farm, near Gympie and another good rider turn out kept things bustling in the pits and on the track.

With Jackson Camilleri still sidelined with injury, it was up to Jake Cannon to fly the YJR flag. Contesting the 12-15 years 85cc class, Cannon came home in fourth place, just one point shy of the podium with his 6-3-2 results. His sixth in moto one came after a spectacular fall while in second place.

With one round remaining, Cannon leads the 85cc class in the series.

All eyes on Sunday were on the MX2 Pro field with a star-studded line up thundering around the MX Farm track. Tanti, Dobson, Styke, Wilson, Ferguson, Rogers, Waters and Walker were just some of the names on the grid and made for some intense action.

Jay Wilson (Yamalube Yamaha Racing) led the Yamaha charge home with a second place finish on the day. Wilson crossed the line in 11th place in moto one after a fall but rebounded well to dominate the field in the final two motos to land on the second spot on the podium.

In third was former MX champ and now off road champ, Luke Styke. It had been over three years since Styke lined up at a motocross race, but he showed he still has what it takes, and his starts were as good as they were back in his MX prime. He finished with 2-4-3 results for third overall.

Serco Yamaha duo of Aaron Tanti and Jesse Dobson had a challenging day but battled on to finish fourth and fifth respectively. Tanti finished with 4-6 results in the first two motos but a crash on the front straight for race three dashed any hoped of a round podium.

Dobson debuted his Serco Yamaha ride but fell in a couple of motos. He finished with 5-10-4 results and will be looking to improve next time out.

One standout on the day was Levi Rogers. Having his first ride in the MX2 Pro class, Rogers blended in nicely with an experienced and fast pack of riders and more than held his own in every race. The eighth overall doesn’t look impressive on paper, but he was inside the top five in each race and only some small mistakes later in the races cost him a better finish. The weekend should be a confidence booster knowing he can mix it with some of Australia’s best.

Kota Toriyabe again gained valuable experience as get more racetrack time on Australian soil. Toriyabe finished with 7-12-10 results to claim 10th overall. This was by far the most talented field he had races against and learnt a lot from his weekend.

The next event in Queensland takes place at Echo Valley in Toowoomba on August 15/16.