Five rounds over a two-week period the target of selected teams. 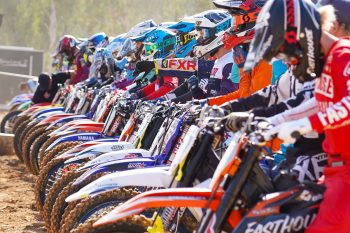 Options are being assessed that could see a season-saving hub created to conduct the 2020 Australian Motocross Championship over a two-week period as select series stakeholders work to overcome complications caused by the COVID-19 pandemic.

A questionnaire has been distributed this month to monitor interest from a broad range of national competitors on the bold effort that remains in its infancy, understood to have been met with relative positivity from a majority of privateers who have submitted the survey.

The second wave of coronavirus currently affecting Victoria and New South Wales in particular has made for tighter government restrictions and state border closures, impacting plans for Motorcycling Australia (MA) to get a new-look series off the ground as soon as initially intended following the recent departure of former promoter Williams Event Management (WEM).

However, leading teams reliant upon going racing at the national level are now considering as many as five rounds across three weekends between 27 September to 11 October, including multiple mid-week races. It’s been proposed to race on three Sundays and two Wednesdays in succession under flexible circumstances during the unprecedented times.

Such a move would likely require a quarantine period on arrival into the hosting state, potentially as well as those returning to their home states, and the hub would need to meet specific protocols in order to be completed successfully. There are already a number of mainstream sports operating under strict operational guidelines, including certain travel exemptions.

The economic environment and logistical challenges will prove a determining factor in the bid being well-received by the wider racing community, as will employment commitments because of the extended stay required. Those pitching the idea suggest the aim would be for it to be at least as cost effective as the traditional calendar that’s previously spanned multiple states.

Queensland had been a favoured location prior to increased measures put in place by the state government to reduce the chances of a widespread COVID-19 outbreak, with New South Wales now becoming the primary topic of conversation. There could be as many as three venues included on a compromised schedule to get the series done.

With a rapid structure poised to take place behind closed doors, a free-to-air and pay television package has been proposed to take the sport to the fans and additionally provide vital sponsorship exposure for competitors. Entry fees could be raised to $400 (from $295 in MX1 and $285 in MX2) per round to off-set production costs if TV is in fact introduced.

While the hub-style arrangement is primarily being facilitated by Penrite Honda Racing’s Yarrive Konsky in collecting data before presenting it to MA, the national governing body is currently moving forward in planning a more conventional multi-state calendar in the final quarter, which would also be subject to further changes.

WEM revealed late last month that it would be exiting the MX Nationals a season sooner than originally announced, resulting in MA electing to manage the series internally for 2020. Most recent communications indicated that a east coast-based series was still in the works, those details expected to be released as soon as next week unless the outside proposal of a hub gains momentum beforehand.