Those who starred in Supercross besides Tomac, Webb and Roczen.

With the 2020 Monster Energy Supercross championship now firmly in the history books, MotoOnline takes a closer look at the 450SX challengers who finished off the overall podium to weigh up their on-track performances. 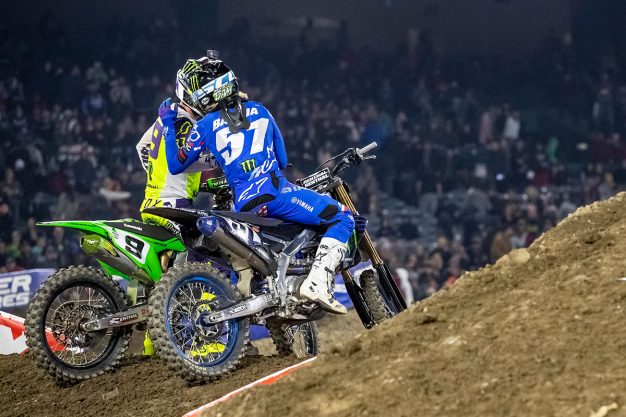 Rider: Jason Anderson
Rating: B+
Rundown: The 2018 champion was always there or there abouts in the standings, but wasn’t able to earn a main event win this year. The Rockstar Energy Husqvarna rider chalked up five podiums from the 17 rounds, with the only real blip in his season coming at SLC5, when he crashed in the second turn, then later in the race got caught in a multi-rider pile-up in a corner – it took roughly a year to separate his front wheel from the back of Vince Friese’s bike. Anderson finished on a high with a season-best second-place, which would be a welcome confidence-booster heading into the outdoors, and he earned fourth in the final standings.

Rider: Justin Barcia
Rating: B+
Rundown: Monster Energy Yamaha’s Justin Barcia started his championship the exact same way he did last year, winning the opening round at Anaheim 1. After a second place the following weekend in St Louis, Barcia circulated in or around the top five until Atlanta’s ninth round, where he finished second, and was still a chance at the title entering the forced mid-season break. However, the SLC rounds saw him quickly tumble down the pecking order as he struggled to find the form he had earlier in the season. Two DNFs at SLC4 and SLC7 destroyed his chances of a championship top three as he constantly found himself in mid-pack battles after poor starts, so fifth in points was the end result.

Rider: Zach Osborne
Rating: A
Rundown: Rockstar Energy Husqvarna’s Zach Osborne wins the ‘Jekyll & Hyde’ award this year. The first eight rounds saw him show flashes of promise at St Louis, A2 and Arlington, but that was countered with inconsistencies, crashes and a string of results outside the top 10. Osborne was then injured in a practice crash and missed Atlanta and Daytona, but used the COVID-19 break to heal and emerge like a different guy for the SLC rounds. He didn’t finish outside the top five once in those seven outings and stormed to a first-career 450SX win at the final round where his teammates, Anderson and Dean Wilson, joined him on the podium. Those results saw him soar to sixth in the standings. Rider: Malcolm Stewart
Rating: B-
Rundown: It was great to see Malcolm Stewart finish a full season, wasn’t it? A visit to the podium at some stage in the series would’ve been well-deserved, but the Smartop Bullfrog Spas Honda rider couldn’t quite make it happen. It was obvious that he’d done his homework in the mid-season break, though, as his performance improved noticeably during the seven Salt Lake City races. The biggest mark against his name came at SLC4 when he suffered a mechanical DNF, but three top fives in those closing rounds proved he’s comfortable running near the front and should be a legitimate podium threat next year.

Rider: Adam Cianciarulo
Rating: A-
Rundown: Coming into the 2020 supercross championship, Monster Energy Kawasaki’s Adam Cianciarulo was hyped up as one of the great hopes to be a contender, despite it being his rookie year in the 450SX class. AC opened his premier class account with a second at Anaheim 1 and added another runner-up finish in San Diego, but then the wheels fell off at Arlington when he crashed in practice and broke his collarbone, forcing him to the sidelines until the SLC races. His return at Salt Lake was also shortlived, when he crashed on the opening lap of the SLC1’s main event and was run over – the resulting back injury saw him sit out the remainder of the series. Remarkably, he qualified quickest at the first seven – yes, seven! – rounds and will be back even stronger come 2021.