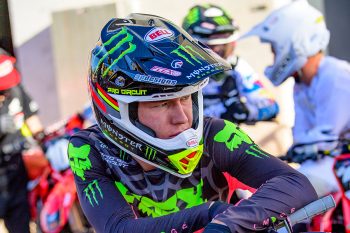 An extensive list of internal injuries have been detailed by Austin Forkner after his title-ending crash at the 2020 Monster Energy Supercross finals in Salt Lake City.

Forkner had been in contention or the 250SX West championship when he went down in the Showdown main event, effectively enabling Dylan Ferrandis (Monster Energy Star Yamaha) to cruise to a second-straight crown.

Monster Energy Pro Circuit Kawasaki had previously indicated that Forkner sustained abdominal injuries in the incident, however, he has now personally revealed the full extent of his injuries following a lengthy stay hospitalised in Utah.

“It’s about two weeks out from my crash now and basically, what happened was where I went over the ‘bars and got smashed into the berm, I actually ended up breaking my pancreas in half,” the 21-year-old said.

“A lot of just internal damage, didn’t end up having anything broken, but the pain from that was… I feel like I have a pretty good knowledge on pain – I’ve hurt myself a few times – but this was by far the most painful thing I have ever experienced.

“It was brutal, definitely the toughest six or seven days I was in the hospital, they were horrible. I feel a lot better now, just getting to the point where the pain is settled down and my body is started to settle down.”

Forkner could benefit from recent delays to this year’s Lucas Oil Pro Motocross Championship, which was scheduled to commence on 18 July at Ironman Raceway in Indiana, but has been put on hold due to a surge in coronavirus cases.