Newfound opportunity on the horizon for capable Queenslander. 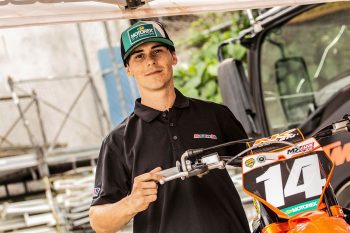 Recover8 KTM has confirmed the departure of Jesse Dobson as the team’s MX2 rider for the 2020 Australian motocross season, which is yet to commence due to the ongoing effects of coronavirus.

A short statement from the Raceline Motorsports-operated team said that while the Queenslander will remain a Recover8 ambassador, he won’t be in the official KTM team as planned. It is unclear if a replacement will be signed.

“RecoveR8 KTM has released Jesse Dobson from his 2020 contract as the MX2 rider on the team,” the statement read. “This is an unfortunate situation, but due to the ongoing unknowns in national level racing due to the COVID-19 outbreak, we have had to make the tough decision to release Jesse from our program.

“Jesse will still continue to work with and be supported by Recover8 as an ambassador. We wish him nothing but the best for whatever the 2020 season delivers. We welcome the opportunity to work with Jesse again in the future should the right fit present itself for both parties.”

Dobson has most recently been linked to a seat opening at Serco Yamaha alongside Aaron Tanti following the exit of New Zealander Dylan Walsh. The latter was named at Serco late last year, but most recently has been based in the US training aboard Kawasaki machinery in a bid to further his international career.