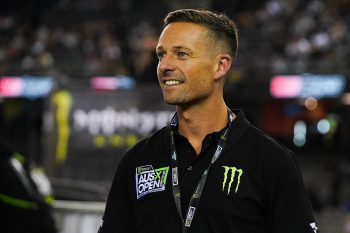 WEM director Kevin Williams confirmed on Friday that WEM would be stepping down from its position operating the Australian Motocross Championship following over two decades leading the sport.

Williams has also been instrumental in assisting AUS SX Holdings in the operations of AUS Supercross, with WEM responsible for the race amanagement of the series in addition to the high-profile S-X Open International Supercross FIM Oceania Championship.

“On behalf of myself, Ryan [Sanderson] and the team at AME and AUS SX Holdings, we would like to express our sincere gratitude to Kevin Williams and his family for their contribution to motorcycle racing in Australia for the past 20-plus years,” AME Management and AUS SX Holdings co-founder Adam Bailey stated.

“Like many, my first interactions with Kev, were as a racer competing in his events. Like many also I was guilty of being critical of ‘the promoter’ of any events I competed or was involved with. Not intentionally, but just out of innocent ignorance.

“Having graduated into being a promoter myself since 2015 alongside Sando and our team, of course now, I have the benefit of a completely different perspective. Promoting events is an incredibly taxing and sometimes thankless task. Those involved do it out of passion and love for the sport first with financial gain a far from guaranteed byproduct if everything falls into line for you, which sometimes they do not.

“In these situations the workload, stress and commitment does not decrease. The reality is, it is possible in events to work an entire year in planning, execution and operations, only to finish with further bills to pay rather than a chunk of cash in your pocket as per the outsiders’ perception.

“Anyone that has promoted events can vouch for this and have spoken about it openly including Phil Christensen, Mike Porra and Yarrive Konsky, to name a few that have invested huge amounts of time (and money) into Australian motocross/supercross events our of passion and will to see them succeed.

“With this in mind, I think it remiss of us not to appreciate and respect a person and family, who can survive in this environment for an extended period of time like WEM have. With the current global challenges facing events, sport, entertainment and business in general, I can fully appreciate Kevin’s decision to step down from promoting the MX Nationals series and hope that we as an industry can show him and his family the gratitude they deserve for many years of commitment and sacrifice to the sport they love as much as we do. It is an extremely tough gig.

“Kevin and Christine have always been incredibly supportive of my personal career, even long before assisting Ryan and I in our supercross ventures, which I’d like to thank them both for, once again. From commentary to TV hosting at their events, they supported me despite the little experience I had at the time. I know I’m one of many that have benefited from such opportunities over the last couple of decades.

“Since 2015, Kevin and his family have worked hard with us to establish the AUS-X Open in the first place and more recently events in Auckland and our involvement as the series promoter for the Australian Supercross Championship. Kevin completely opened his archives and has been incredibly generous with his knowledge both in events and in life as a promoter in our industry.

“I have leaned on him personally as a councillor of sorts when times have been tough/frustrating and he has mentored both Ryan and I continuously as we continue to chase our dreams and passion for promoting dirt bike events in Australia. He has had our backs when others have not and he has stood by us through amazing success and significant stress of potential failure to the level on few could ever understand.

“He and his family have literally put their own blood sweat and tears into ensuring our events and our businesses are a great success. For this we are eternally grateful. I sincerely hope others will join us in saying a huge thank you to Kevin for 20-plus years at the helm of Australian motocross. We look forward to a continued relationship moving forward with regards to the Australian Supercross Championship and have no doubt that with his input and side-by-side, we can achieve great things together in the future.”

Plans are still in the works for AUS Supercross to be staged later this year, however, it remains uncertain if the annual AUS-X Open Melbourne or S-X Open Auckland events will be able to take place, pending international travel and ongoing government restrictions that are currently in place.