Important result for Husqvarna rider in a bid to secure his future. 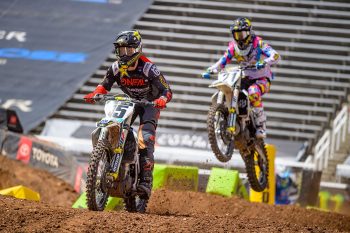 Claiming a first podium of 2020 at the final round of Monster Energy Supercross came as a timely result for Dean Wilson, adding belief as he works to rebuild his career.

Wilson, 28, has been struck by injuries in recent years and entered this season under an injury cloud as part of the Rockstar Energy Husqvarna team.

Despite still recovering from an injured hip sustained at the Monster Energy Cup, Wilson gritted his teeth to line up from the opener at Anaheim and was finally rewarded with a podium at Salt Lake City 7 on Sunday after leading his share of laps.

“I really, really wanted to do well and I wanted to be on the podium this whole time,” Wilson reflected. “My starts were my biggest downfall, just starting from behind and last [round] was such a disappointment.

“Sometimes you’re like, ‘man, do I still really have it?’ but, you know, this is awesome. Through my injuries and stuff it’s been really hard to believe in myself and have my confidence back – that’s the hardest thing, just believing in yourself and it takes rides like that to get that.

“My start was so good, leading laps was awesome and I seen Jason… I just wanted to finish out the race and not blow myself out too much. I led laps, that was cool, but we’ll get there and lead more eventually. It’s so awesome to see the how Rockstar Energy Husqvarna team up on the podium. I’m stoked.”

Wilson will come off contract at the end of this year, yet to finalise his future beyond the upcoming Lucas Oil Pro Motocross Championship after finishing eighth overall in the 450SX standings.