The rise of the Yamaha bLU cRU Off-Road Racing rider in the AORC.

Yamaha bLU Cru Off-Road Racing rider Michael Driscoll is fast becoming a major player in the Yamaha Australian Off-Road Championship (AORC) and already has multiple championships to his name as he climbs the ladder of success.

In 2016, Driscoll was competing at the Australian Junior Motocross Championships in Renmark, South Australia, as part of the Yamaha Junior Racing program. His week started off reasonably well as he placed in the top five in his heats, but it’s when the weather turned nasty and the track got water-logged that Driscoll began to shine.

With an on the ‘pegs, almost text-book riding style and an ability to handle a wide range of conditions, that triggered a want to try off-road and within 12 months of swapping his focus from motocross, Driscoll had already claimed his first national title in the Enduro Junior (EJ) ranks.

“My options at the end of my junior career were limited as there were already a heap of good Yamaha riders looking to move into the MX Nationals,” 21-year-old Driscoll explained. “Yamaha could offer me some support in off-road and, as I did a lot of riding in the bush as a kid, it was something I wanted to do and see where it took me. 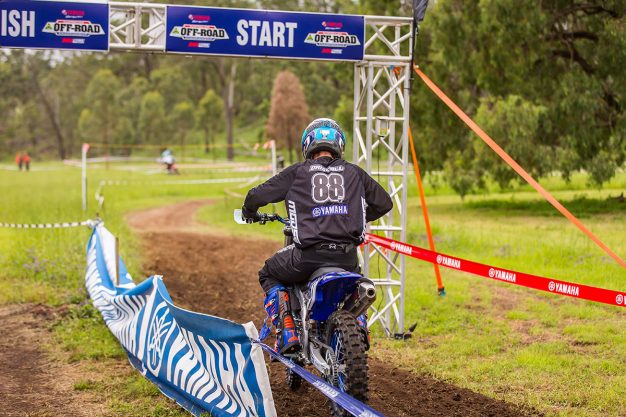 “The first year was a massive learning curve and I was able to lean on a lot of people to take advice from and understand the off-road world. I was fortunate enough to win the EJ class in my first year and my off-road journey had started successfully.”

Driscoll backed that up with a title defence of the EJ class in 2018, with increased support from Yamaha and the Yamaha Active8 Yamalube team. He was a member of the team that included Luke Styke and Josh Green, both of whom were happy to pass on their racing knowledge.

“I copped some flack for staying in the EJ class another year, but I looked at it as I had only one year of off-road racing and there was still so much I didn’t know or understand,” he continued. “The E1 guys at the time were a fair way ahead of me, so it was in my best interest to keep learning at my pace and not be in over my head with the established pros of E1.”

The jump into the pro ranks came in 2019 where he finished a very respectable fourth place in the E1 class against some top opposition, but maybe the standout moment of the year for Driscoll was his selection in the ISDE Junior Trophy team to race the WR450F and going on to win the title alongside Australian teammates Fraser Higlett and Lyndon Snodgrass. He was now part of a world championship winning team and his move to the bigger capacity 450cc machine suited him perfectly: “The moment I stepped onto the WR450F, I felt instantly at home. You don’t have to rev the bike as hard or ride it as aggressively and it just suits my style and mentality better.”

That momentum has continued into the 2020 season with Yamaha bLU cRU Off-Road Racing, Driscoll has made the next step up in his career and into the E2 class on the WR450F. With three rounds of the AORC completed before COVID-19 struck, Driscoll sits in fourth place. Those above him are world-class, with Daniel Milner, Green and Todd Waters all within striking distance.

“To race with riders like Milner, Green and Waters is amazing, but now I have to shift my focus and not be over whelmed by their names and just try and beat them,” Driscoll added. “I continued to work hard during the break in racing.

“I want to show I have improved when things get up and going again. I’m loving riding at the moment and the opportunities racing is giving me. The last few years have flown by pretty quick and I want the next few years to be as exciting as my first in off-road.”