Top 10 result ‘a good one to end it’ suggests Reed 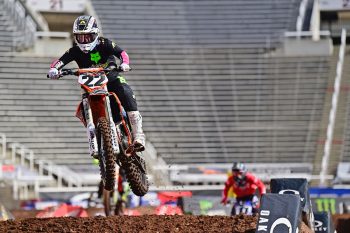 Scoring a top 10 finish in the 2020 Monster Energy Supercross finals at Salt Lake City 7 makes for ‘a good one to end it’, retiring two-time champion Chad Reed suggested post-race.

The 38-year-old wrapped up his full-time career at Rice-Eccles Stadium this afternoon and delivered his best ride of the year in the process.

It was a timely performance from the Mountain Motorsports CR22 Racing rider, who has enjoyed an upswing of form through the final seven races since switching from Honda to KTM machinery during the mid-season hiatus.

“It’s so hard to put it into feelings,” Reed reflected. “The whole past couple of days has just been steamrolling, you know? When you start getting text messages, social media and stuff, it starts to hit home.

“When you start off a day where the track’s muddy and nasty… this may be the last one [laughs]. I don’t enjoy practice to the main event anymore – I just love racing main events. That’s when it’s real.”

While Reed has stated this week that he is considering lining up in selected 450SX rounds next year, finishing on a high in Utah could instead be an ideal way to cap-off his illustrious career that’s spanned over two decades.

“The track was brutal,” he added. “When you see the champ [Cooper Webb] in front of me, Ken Roczen struggling, I just was ticking away, putting laps together and it was probably my best ride of the season. It’s on father’s day – I think it’s time go and be a good dad.

“Congrats to the champions today, it was a great series to be a part of and I don’t know if I’ll be back or not, but this is a good one to end it if this is it. Also to the fans, you guys were missed in these last seven races, so appreciate your love and support on social.”

Reed’s results in Supercross place him among the greats, the Australian claiming 44 wins to be fourth on the all-time wins list, with 132 podiums. He won the 2004 and 2008 premier class championships.