No excuses for ‘mad and frustrated’ Ferrandis after runner-up

250SX West lead narrowed down to seven points with one round to go. 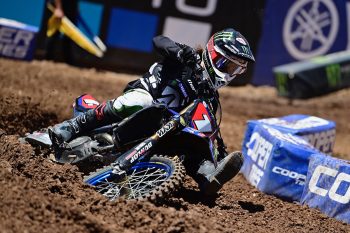 Expect added determination from Dylan Ferrandis at the 250SX Showdown in Utah this weekend after admitting he was left ‘mad and frustrated’ following SLC5.

After taking a pivotal hole-shot, defending champion Ferrandis led the opening 14 laps until an aggressive Forkner shoved his way past. From there he went on to win his fourth final of the 2020 season.

“For sure, I was full of frustration,” he admitted. “It’s been kind of a long time since I was beat so easy, so I was mad at myself and frustrated because it’s not normal to run the red plate and number one to get beat like that.

“Obviously, no excuse and I don’t want to say any excuse, just try to stay professional. I just lose the race and still have a seven-point lead, so it’s fine, but yeah, I was really mad at me, for sure.”

Monster Energy Star Racing Yamaha’s Ferrandis was the dominant force through the opening stages of the series by winning three of the six rounds prior to Monster Energy Supercross heading east in February, however, Forkner has come out stronger in Salt Lake City than he previously was.

“I feel that I’m better than before, just on the race-day, the first one was tough physically and with the bike I was struggling a little bit on the setting,” the Frenchman explained.

“This one, I was feeling awesome all day and I crashed in the heat… bad gate on the main, it doesn’t help me. Maybe, just not used to being out front that soon and, just, I don’t know. I missed one rhythm section and I think it cost me a lot.

“It’s okay, I mean, after Austin passed me I was feeling great and I came back strong, had the best lap of the race. I felt not that much tired at the end of the race. Maybe I need to protect more the inside now.”

Ferrandis still holds a considerable advantage in the 250SX West championship table, carrying a seven-point buffer over Forkner entering the Showdown round to decide this year’s champions on Sunday afternoon.