There’s been a lot of hype surrounding 16-year-old Jett Lawrence since arriving in Monster Energy Supercross as part of the powerhouse Geico Honda squad and for good reason. Now, just five races into his 250SX career, Lawrence has claimed a first-career podium in the western region after finishing third on Sunday at Salt Lake City 5. 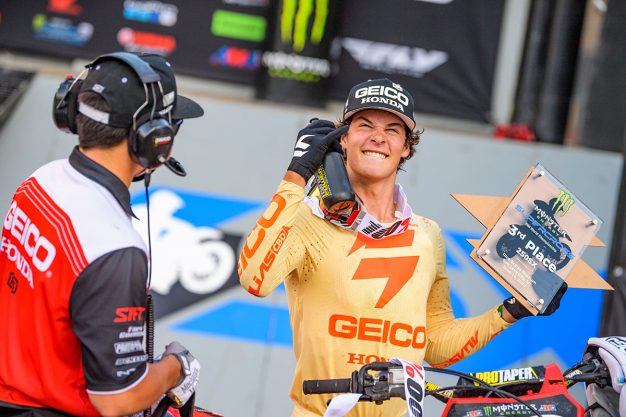 Clashing with Austin Forkner in the heat race…

I got an amazing start. I ran a little wide, but apparently Forkner was exiting stage right also – we ended up both going down, anyway. It wasn’t really called for, I’m not even in the championship, but it’s whatever he thinks. I ended up getting back to sixth and that’s all I really needed, which was pretty good. I was pretty pissed off about it, obviously, but I ended up coming back and getting it on the podium for the first time, so that’s definitely a plus.

Working through the field including passing Hunter…

Obviously, I had a terrible start. I was pretty pumped that there were whoops out of a turn, which I’m pretty happy about. They came into favour, I made a lot of my passes through there and I really gelled with the track. It took me a while to pass [Hunter] because he’s my brother and I don’t want to pass him dirty, but definitely, it’s cool to kind of see another Lawrence out there, that’s for sure. It was definitely a bit of a struggle to get around him. I didn’t even know that I came from outside of the top 10 to third, so that’s pretty cool. It definitely feels good to get this P3, I feel like I’ve earned it from coming outside of the 10. It’s been a rough path to get to where we are now – I got a little emotional after I went over the line. 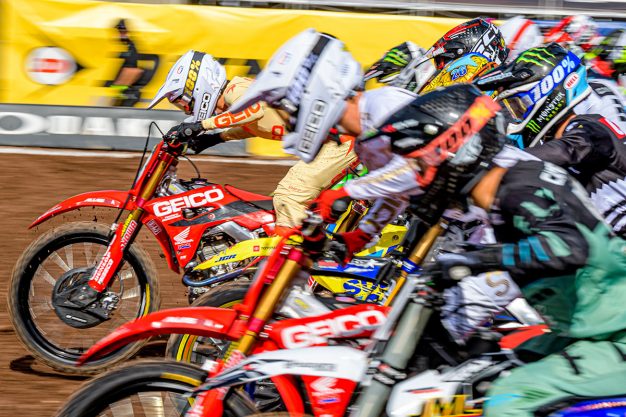 Charging toward the end and into podium position…

Yeah, I was feeling really good. A lot of guys, I don’t know if they were fading, but I started to get better and better every lap. I definitely made a pretty good charge, I reckon.

The path to this point of your career…

Everything went through my head, all the hard times we had in Europe, eating two-minute noodles in Australia just trying to survive, really. It feels good to be finally here and to be with such a great team – Geico Honda is more like a family to us. They’re all so good to us.