A resurgent Ken Roczen managed to win the 15th round of 2020 Monster Energy Supercross, rebounding from the health issues that have previously struck him in Salt Lake City.

The Team Honda HRC rider held on for his fourth 450SX victory of the year after making an early move on Cooper Webb (Red Bull KTM) in a convincing effort.

Roczen has been badly hampered by fatigue in recent races caused by a virus and a case of the shingles, however, nothing would stop him from standing on top of the podium again today. He won by 3.140s over defending champion Webb, with points-leader Eli Tomac (Monster Energy Kawasaki) third.

Contact between Webb and Tomac in the first turn saw the latter bumped back through the pack, but he was able to claw his way back for another podium to maintain the red plates. He now leads by 24 points over Roczen, who climbed back past Webb by one point in the standings.

There was drama for Jason Anderson (Rockstar Energy Husqvarna) on the opening lap and he later went out of the race altogether after being caught up in a multi-rider incident including Vince Friese (Smartop Bullfrog Spas Honda). Australia’s Chad Reed (Mountain Motorsports CR22 Racing KTM) was 11th.

Monster Energy Supercross will continue with the penultimate round this Wednesday, 17 June, where Tomac has his first real opportunity to clinch the 450SX championship if he goes on to win the main event. An aggressive move by Forkner saw him get by points-leader Dylan Ferrandis (Monster Energy Star Yamaha) on lap 15 and he went on to win by 1.751s.

While Forkner closed Ferrandis’ advantage in the championship to seven points with one Showdown round remaining next Sunday, it was a spectacular ride for Jett Lawrence (Geico Honda) to third that will also make headlines tonight.

Lawrence, only 16 years of age, ended the opening lap in 11th position and sliced his way through the pack for a first-career podium result. He made a couple of late passes on Cameron McAdoo (Monster Energy Pro Circuit Kawasaki) and Michael Mosiman (Rockstar Energy Husqvarna) for position.

It was then TLD Red Bull KTM teammates Brandon Hartranft and Derek Drake, followed by Christian Craig (Geico Honda) – who inside the top three prior to a fall – to complete the top 10. Penrite Honda’s Luke Clout was 12th, with Geran Stapleton (Honda) winning the LCQ and finishing in P20.

Wednesday will see the return of the 250SX East category, before next Sunday the annual Showdown will be staged at Rice-Eccles Stadium to determine the 2020 Monster Energy Supercross champions. 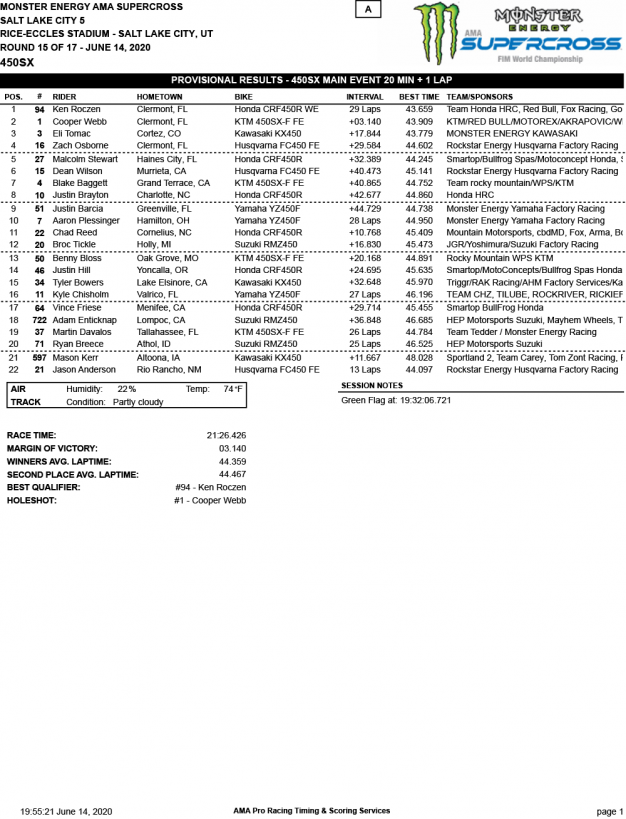