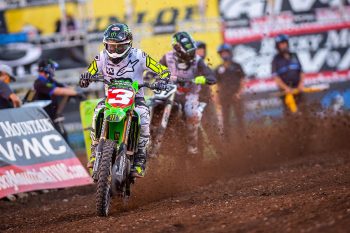 Eliminating poor starts continues to be a priority of Monster Energy Supercross leader Eli Tomac after labelling his start ‘unacceptable’ at SLC4 on Wednesday.

The Monster Energy Kawasaki rider was able to slice his way through the pack from outside of the top 10 to third, but it could have been far worse.

Tomac has admitted that it was genuinely stressful to see title rivals Cooper Webb (Red Bull KTM) – winner of the main event – and Ken Roczen (Team Honda HRC) battling for P1 while he was well down the order during the opening half of the race.

“So, the outcome was fine, but to be honest, I was pretty stressed out the first lap when I saw Coop and Kenny up front. I’m like, ‘oh no, this might be a 10-point night’, so I just kept digging there, got to third and that was acceptable, but I can’t keep doing those starts like that again.”

With the 450SX championship on the line and just three rounds remaining, Tomac faced true adversity in yesterday’s race in a bid to minimize damage.

A late pass on Blake Baggett (Rocky Mountain KTM WPS) elevated him onto the podium, but he says there isn’t any specific reason why he’s managed to remain calm in those situations during 2020.

“I wish I could say there is, but no,” he added. “I haven’t been making those bad starts or whatever, like minimizing the damage. I had a bad race in Atlanta, went down and got back to fourth.

“Tonight, totally buried in 12th or 16th or something and got back to third. Those are the nights that have changed for me versus the past. I don’t know, the more racing, the more experience you get, I guess.”