What, when, where, how and why with Berry Sweet Husqvarna signing.

Despite being eligible to remain in the MXD class for another two years, 2019 MX Nationals MXD champion Regan Duffy, 17, is stepping up to the MX2 field for 2020, riding alongside defending MX1 title-holder Todd Waters in the Berry Sweet Husqvarna team. MotoOnline.com.au caught up with the West Australian teenager and asked him Five Questions. 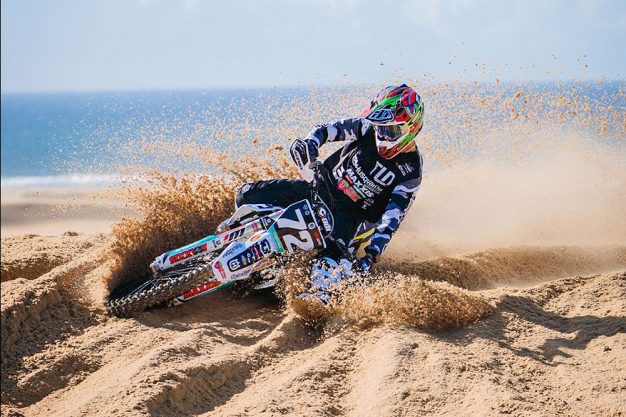 My home track is the AJS Motorcycle Club, which is where the MX Nationals used to be held at Wanneroo. The track is only five minutes away and is a deep sand track, but it’s still one of my favourites. I’m lucky to have such a good track so close to me. I also live on a 240-acre farm and have a big main track with heaps of different soils on it, two sand tracks, a supercross track and a pitbike track. The two sand tracks started from a simple rut track and just expanded from there, and are almost entirely white, gutless sand. My parents run three other cattle farms around WA, so I don’t have a shortage of places to go and ride.

When do you think we’ll be back racing again?

Honestly, I’ve got no idea. Unless there’s a massive law change in the number of people allowed to attend events ASAP, I can’t see it happening soon. The clubs get money from the crowds coming to watch the racing and, without that, there’s no point. In the past month or so the virus situation has eased a fair bit and if it keeps going the way it’s going, I’m hopeful that we’ll still be able to race in August.

Where do you see yourself in five years time?

If all goes to plan I’m hoping I’ll be racing for a factory team in Europe and from there, maybe go to the US. My goal is to go to Europe first though and that idea was cemented in me from my experience racing the MXoN in The Netherlands last year. Yeah, it was a crazy, washed-out event, but the crowd and atmosphere was amazing, and the organisation was so laid back, but professional. If I win the Australian MX2 title this year I’ll probably try and get to Europe as soon as I can and see if I can get one of those world championships. How have you kept your motivation up with the delayed schedule?

I’ve been doing a lot of play-riding, trail-riding, hitting big jumps with friends and just trying not to lose sight of the goal of battling for championships. It’s frustrating not knowing when racing is starting up again, but I’d hate to be out of shape if we suddenly get two weeks notice that we’re going racing again. A lot of it has been about having fun lately, out at the Two Rocks dunes near Perth the boys dug a wide groove and chucked some wooden pallets in, scraped in a down-ramp and we hit the thing. This afternoon we built some new pit-bike jumps on the track at home, so we’re about to go out and have a play on them.

Why have you elected to step up to MX2 this year?

I’m not sure if there’s a rule that if you win the MXD championship you have to step up to MX2, but after taking that championship last year I thought I’d do it anyway and put myself against some tougher competition. It’ll be a lot harder and that will develop me as a rider. I’m really close to the Berry Sweet guys and talked to them about the team starting up, then Todd called us up and we worked out an agreement. Before the coronavirus hit I was living with Todd and his partner Gill, training together and he taught he a heap of stuff. That’s one of the cool things with being on the same team as him – he wants me to win as badly as he wants to win and is more than happy to help me out and give me advice. Todd’s also raced in Europe and the US, so I get to hear a lot of the stories and pick his brains about what it’s like over there.