Elevation not an issue in Utah for Anderson so far 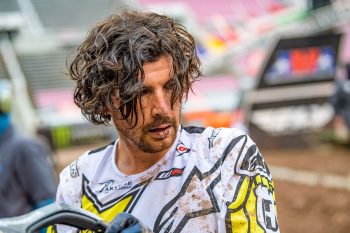 Racing at elevation hasn’t been a problem so far for former Monster Energy Supercross champion Jason Anderson, who landed on the podium at Salt Lake City 3 on Sunday afternoon in trying track conditions.

Anderson has been known to experience altitude sickness during his career, but the Rockstar Energy Husqvarna rider said post-race in Utah that it hasn’t affected him this time around.

“Honestly, it hasn’t been too much of an issue,” explained Anderson. I went home to New Mexico for long enough to take it easy and work my way into acclimating and stuff like that. I think here is a little lower than even where I was at home or even where the Denver Supercross is, so I feel good.

“I think, just, no matter if we’re at sea level or whatever, we’re racing so close together we’re kind of more focused on recovery in between the races than trying to ride or anything right now.

“We have two days now until our next race, so I think we’re going to try and recover as much as possible and kind of take it easy, but I feel good. I just feel like I’ve been getting a little bit of arm-pump, which is kind of weird for me, but I’ve been able to work through it so I’ve got no excuses and we’ll go into these last four rounds.”

Anderson recorded a pair of fourth-place results in the opening two races at Rice-Eccles Stadium, then improved for a podium with third position on Sunday during the 13th round of the championship. He’s currently fifth in the standings, closing to within 10 points of Justin Barcia with four rounds to go.