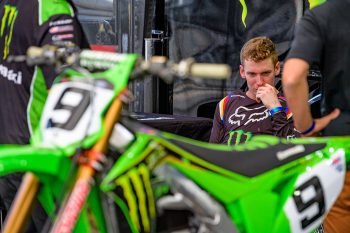 Further scans to his back injury have confirmed newfound fractures will sideline Adam Cianciarulo for the remainder of 2020 Monster Energy Supercross.

Cianciarulo was injured at the first Salt Lake City round last Sunday, then attempted to ride on Wednesday, but the discomfort was too severe.

It’s now been confirmed that the Monster Energy Kawasaki rider has four acute fractures on the transverse processes from the L1 to the L4 in his right-hand side, lower-back. He will require a couple of weeks off the bike, but won’t require surgery or a back brace.

“This is not the news I was expecting to be sharing today, but after speaking to additional specialists and the team, it is in my best interest that I sit out the remainder of the Supercross season,” the 23-year-old announced.

“This is a tough pill to swallow as I was really excited to get back to racing here in Salt Lake City, but I have to be smart with what my body is telling me. For now, I will focus on my recovery and do everything in my power to make sure I am ready to go in July for the start of the AMA Pro Motocross championship.

“I want to thank the entire Monster Energy Kawasaki team for their unwavering support through this tough time. We will be back and stronger than ever.”

Cianciarulo returned for round 11 after recovering from a broken collarbone sustained in Arlington, however, an early incident in the SLC1 main event saw him unintentionally struck in the back by defending champion Cooper Webb (Red Bull KTM).