Tomac ‘satisfied with the points’ after P2 on Wednesday 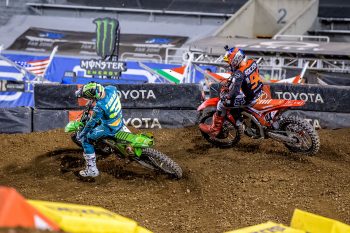 A runner-up result allowed Eli Tomac to extend his lead in the 2020 Monster Energy Supercross standings on Wednesday, satisfied despite falling short of consecutive wins in Salt Lake City.

With only five races remaining – all to be staged inside Utah’s Rice-Eccles Stadium – the Monster Energy Kawasaki rider now has a 13-point buffer.

“Positive, that way with the points, but I mean yeah, I would’ve liked to win,” Tomac said. “Second was okay on the night. Just the way things were going, I didn’t get the starts that I got on Sunday and that was it basically, right?

“Too many good guys in front of me early on in the main event to really catch the lead group. So, that was it for me. Overall I was satisfied with the points though.”

Tomac said that, although in the past he has faltered when fighting for the prestigious 450SX crown, ever-increasing experience is on his side this time around when vying for a first-career Supercross championship.

“I feel like, maybe I’ve done maybe X amount of races and have done X amount of time racing now that you get more comfortable or you know what to do in these certain situations,” he explained. “It’s an experience thing.”