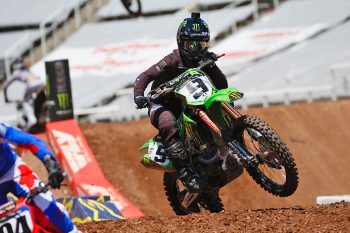 An early fall forced the returning Adam Cianciarulo out on lap two of the 450SX main event in Salt Lake City one, now being cleared of injuries since.

The Monster Energy Kawasaki rookie was making his first appearance since breaking his collarbone in Arlington and picked up where he left off in terms of speed.

As Monster Energy Supercross held its first of seven rounds at Rice-Eccles Stadium, Cianciarulo qualified third and then finished second in his heat race, only to go down in the early stages while in podium contention during the final.

“Cooper ran into me pretty good there, he didn’t have anywhere to go – not his fault obviously – but got me in the back pretty substantially,” the 23-year-old said after Cooper Webb went over the top of him. “I wasn’t able to finish, just didn’t have it in me.

“It’s pretty painful at the moment, but I got checked out and all is well internally – no broken bones, so that’s good. I’m tired of hitting the ground, I guess I was a little too eager being in a good position so early and not having raced in a while.

“But yeah, it’s the same for everybody, I have to take accountability for that, I have to be better and that’s something I always kind of have to reign in a little bit. I get excited and I really want it, so we’ll fix that. First one out of the way and only up from here!”

Cianciarulo is expected to continue and line-up again when the 2020 season moves forward in Utah this Wednesday, which will mark round 12 of the championship.