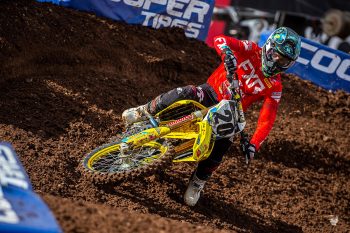 JGRMX Yoshimura Suzuki’s Broc Tickle was re-injured in the first practice session at Utah, ending his day prematurely with another broken hand.

The luckless Tickle broke his left hand in Arlington and was able to recover during the mid-season pause, but ended up breaking his right hand at Salt Lake.

“In first practice I had a little crash, the bike came down and I punched it,” Tickle explained. “I ended up breaking my other hand on the outside – hoping to be back next Sunday.”

It’s been a frustrating time for Tickle since making his comeback in Tampa, where he finished 12th aboard the factory RM-Z450, only to injure his hand a week later in Texas.

A recovery target of next Sunday means he will sit out Wednesday’s 12th round of the 2020 Monster Energy Supercross season, with two rounds taking place per week at Rice-Eccles Stadium for the series-remainder.