Final seven races of professional career to be spent aboard 450 SX-F. 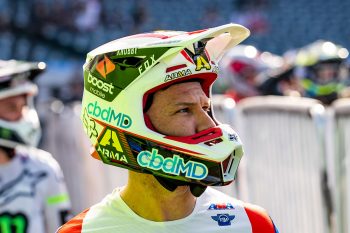 Outgoing Australian icon Chad Reed will be KTM-equipped when Monster Energy Supercross resumes in Salt Lake City, set to complete his remarkable career over the next three weeks.

The 38-year-old began his final season aboard privateer Honda machinery through Daytona, however, he has since switched to KTM in the break.

Reed sold his Hondas when Supercross was first stopped due to COVID-19 in March, initially expecting for the series to restart in the fall. Instead, organizers have been able to bring the final seven rounds forward, beginning this Sunday in Utah.

“I was told that we were done until September-October,” Reed stated. “So, basically I was just getting a motorcycle I wanted to ride for the summer. Mountain Motorsports is a dealer for everyone and for me at this point in my career it gives me a fun opportunity to ride some bikes.

“I loved my Husky when I rode it, so I was just kind of doing it for a little bit of fun. One thing led to another, I really enjoyed the bike, I liked it and then I got the word that we were going back racing and I had already sold all of my bikes.

“But really, to answer the question, I enjoy it. I loved that the brakes, transmission, how light it is, all the things you want from a race bike at the highest, highest level, this bike comes like that production, so it’s just a great starting point.”

In comparison to the independent Husqvarna he rode during the 2018 season in what was a difficult year, Reed has now gained access to higher specification WP suspension that has been specifically developed to suit the KTM.

“The one thing I struggled with most when I rode my Husky – a lot of people want to know that question – I didn’t have the resources back then with the time we had, to have access to the good WP suspension,” he continued. “This time around I have been lucky to have access to that and that has played such a huge role, working with a company the bike is built around.

“So far so good, I really like it. It brings back some fun memories, a lot of the things you do to make it better or improve certain feelings, you are going back 15 years, 16 years to my steel chassis days, so it’s funny to have that stuff in the back of your memory bank and a lot of that still works in the current day going racing.”

Reed is currently 17th in the 450SX championship points, delivering improved results directly prior to the stoppage with 13th-place finishes in Arlington and Daytona. He’s due to retire from the sport following round 17 in a few weeks time.