What, when, where, how and why with the MX2 World Championship rookie.

After two roller-coaster rounds of racing in the 2020 MXGP Championship, 22-year-old Queenslander Nathan Crawford is back in Australia waiting out the current coronavirus pandemic. MotoOnline caught up with the Team Honda 114 Motorsports MX2 racer to ask him Five Questions about his time in Europe and the possibility of racing again this year. What are you doing to keep yourself sane at the moment?

As much as I can! I try to train and I have a bike here that I ride occasionally, but with all the club tracks closed down I only have a couple of private tracks that I can get onto. All the gyms are currently closed, so I’ve got a gym at home with some equipment and I make do with that. I’ve also been out on the road bike a bit. It’s definitely a challenging time, but everyone is in the same boat. Since I’ve been home I haven’t hung out with my mates, just my family and my girlfriend.

When do you personally believe you’ll be back racing?

It’s almost May now and it’s so tough as the information we hear keeps changing. I’ve been hearing that we could be back racing in July, but nothing has been set in stone at this stage. If the MXGP does start in July we’ll have to hope the international air travel out of Australia is open, so that we can actually get back there! If July doesn’t happen and the MX Nationals starts in August as planned, the next option would be to commit to the nationals. If that happens we’ll have to see what we can work out from a team perspective – I’m not sure if that would be on a privateer deal or still as part of the 114 Motorsports Honda team. There are a lot of balls up in the air at the moment.

Where is your team’s base in France?

It’s just north of Spanish border in the south of France. Hossegor is on the coast and is a massive tourist destination. It’s close to the water and the beach, so it’s pretty sick. My teammate, Bailey Malkiewicz, lives in the apartment next door to me, our team workshop is in the same estate, just a kilometre from home, and the team manager and mechanics are all close by as well. During the season our time is pretty occupied and we don’t get to go out exploring too much. I use any free time to just unwind and relax at home, but it’s cool to be based close to the beach. 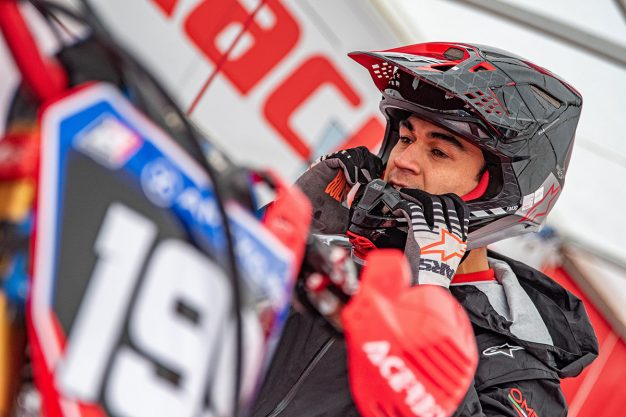 How would you rate your performance at the two MXGPs so far?

It hasn’t been too bad, but nothing special, if I’m honest. I haven’t had a drama-free round yet and have been involved in first-turn crashes and some big stacks. At each round I’ve had one decent moto with a 10th at Matterly Basin and an 11th at Valkenswaard, but the other two motos have been average. The first turns are really intense, I’m seeing tracks for the first time, the jumps are a lot bigger and there’s so much different stuff that comes into play. I’m finding the 250 pretty good and I haven’t had any issues with the power, but I’m pretty light at the moment, in the low 70kgs. Since I’ve been home I’ve been riding a 450 again for practice and it’s been a lot of fun.

Why did you opt to come home for the lockdown rather than ride it out in France?

It was a mutual decision with the team and they actually encouraged us to go home while there was so much uncertainty. It was an easy decision to fly back five weeks ago – if I’d stayed there I’d be by myself on the other side of the world and that would’ve been really tough. At least now I have the comfort of having my family and girlfriend around in a familiar environment. I speak with the team occasionally, but every time it’s the same – they’re stuck inside not doing anything and trying to keep track of the news and what the developments could mean for our season.