Late May recommencement now the target for Supercross

Additional delay expected to be confirmed by Feld Motor Sports. 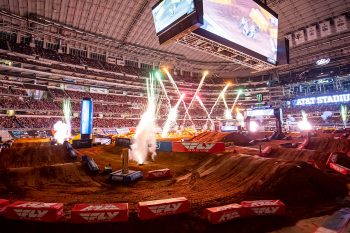 Monster Energy Supercross is anticipated to recommence on 31 May, the latest reports have suggested as Feld Motor Sports gears up to resume the 2020 season.

The series has been on hold since Daytona’s 10th round in March, with plans to host the remaining seven rounds in Arizona continuing to evolve.

It was originally indicted that Supercross would take place in the fall following Lucas Oil Pro Motocross, however, it then became evident that Glendale could be the location for all seven rounds, with multiple rounds to be hosted per week from mid-May over a three-week period.

That targeted date has now been pushed back to the end of May – still behind closed doors – and, now, multiple locations including Houston and Las Vegas have been linked to holding the final races of the 17-round season if the favored Glendale option doesn’t eventuate.

Meanwhile, MX Sports Pro Racing’s Pro Motocross championship will now likely instead begin on 4 July and will complete all 11 rounds into October – those specific dates and locations still to be announced by organizers.