Supercross reported to be restarting at Glendale in May 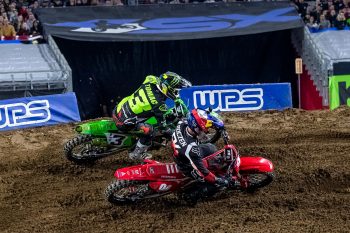 The 2020 Monster Energy Supercross season could resume within a month’s time, as Feld Motor Sports is reported to be assessing a plan that would see the gates drop in Glendale during the middle of May.

With professional sport currently shutdown globally due to the coronavirus pandemic, Supercross could become one of the first to resume in a bid to crown this year’s champions.

First tentatively reported by PulpMX’s Steve Matthes on Twitter over the weekend, rounds 11 through 17 to cap off the season could be held over a three-week period between mid-May into June. All seven events would be held at State Farm Stadium in Glendale, Arizona.

In an unprecedented move, there would have to be multiple rounds per week without spectators in attendance if the series is to be completed within that condensed period. It’s unclear what personnel would be eligible to attend or if there would be strict quarantine measures in place to reduce the chances of anybody contracting COVID-19.

It was recently anticipated that Supercross would be on pause until September following the reduced 11-round Lucas Oil Pro Motocross Championship, which is currently pencilled in to begin in the middle of June.

Glendale already hosted round four of the season in January, when Team Honda HRC’s Ken Roczen captured a clean-sweep of the Triple Crown event ahead of current points-leader Eli Tomac (Monster Energy Kawasaki), who currently has a three-point lead in the 450SX standings following Daytona’s 10th round held on March 7.

An early return to competition would also have to include the remaining rounds of 250SX West and East, which have so far contested six and four rounds respectively. Defending champions Dylan Ferrandis (Monster Energy Star Yamaha) and Chase Sexton (Geico Honda) lead those series.