Melbourne international up in the air as a result of coronavirus. 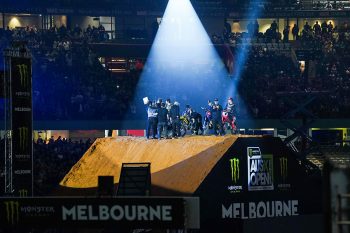 Mounting uncertainty is surrounding the AUS-X Open international supercross for 2020 as the coronavirus pandemic continues to impact the sport globally.

After moving to Marvel Stadium in Melbourne last November, the Victorian event is facing a series of obstacles if it is to take place this year.

Near 35,000 spectators packed the world-class indoor venue on debut at the end of last season, which doubled as the final rounds of both the Australian Supercross Championship and S-X Open Supercross FIM Oceania Championship.

The COVID-19 crisis has caused the suspension of sporting events worldwide, which has effectively put planning for the AUS-X Open event in a holding pattern and could also largely affect the AUS Supercross season altogether.

In addition to social distancing measures that prevent mass gatherings, international and domestic travel restrictions could still exist in the back-half of the year. The AUS-X Open is highly reliant on bringing riders from overseas and the tourism that it encourages, making spectator attendance critical.

Last year’s event was headlined by Americans Jason Anderson, AUS-X Open winner Justin Brayton and Joey Savatgy despite being injured in practice, as well as US-based Australians Chad Reed and Jett Lawrence. Riders of that calibre are leveraged to attract interstate fans as part of a partnership with the Victorian government.

Monster Energy Supercross in the US remains on hold at this point, with the most recent reports indicating that it could restart as soon as next month in a condensed schedule. Otherwise, rounds 11-17 of the American-based world championship would have to resume from mid-September following a delayed Lucas Oil Pro Motocross season.

Locally, the beginning of the MXstore MX Nationals season has been postponed until August and is expected to run its nine rounds into October if government restrictions ease in time to go ahead as tentatively planned. That schedule would force AUS Supercross to shuffle its series opener back to a later date.

Commercial rights-holder of the Australian Supercross Championship, AUS SX Holdings, is yet to address the status of the 2020 series publicly, still finalising possibilities that involve individual event promoters such as Troy Bayliss Events (TBE). AUS SX Holdings is also the parent company of the AUS-X Open.

At the end of February an update on the 2020 championship was circulated through the industry, featuring a draft calendar – now thought to be void – commencing in Queensland on the first weekend of October, before hosting rounds in Western Australia, South Australia, New South Wales and Victoria for the AUS-X Open on 28 November.

Information regarding the opening three rounds remains limited, however, the New South Wales date falls inline with TBE’s plans to host a Wollongong round at WIN Stadium on 21 November alongside the Australian Motorcycle Festival once again.

The continuation of the two-round S-X Open Supercross FIM Oceania Championship had already been unclear prior to coronavirus when New Zealand was absent from that provisional AUS Supercross calendar only released behind closed doors. It’s understood that Auckland may instead be run on alternating years.

Yet further challenges could arise for the AUS-X Open’s immediate future, with the Australian Football League (AFL) certain to take priority as the owner of Marvel Stadium if football extends into the final months of the calendar year due to its current shutdown.

When contacted regarding the evolving situation today, AUS SX Holdings director Adam Bailey confirmed that organisers are continually monitoring the pandemic and associated consequences that are to form over the coming weeks and months. A final decision on the 2020 edition of AUS-X Open could potentially come as late as June.

AUS-X Open was launched in Sydney at the end of 2015, remaining at Qudos Bank Arena for four years before expanding to Melbourne in 2019 after striking a multi-year agreement with Visit Victoria, the tourism and major events agency of the state government.