Victorian Bailey Malkiewicz is one of five Australians taking on the MXGP scene this year and, while the championship is currently on hold, it’s not all bad news for the Team Honda 114 Motorsports MX2 World Championship rookie.

Ever since he started riding dirt bikes as a pre-schooler, Malkiewicz has maintained a steady passion for motocross and racing, doing everything possible to make his dreams of one day becoming a world champion a reality.

The 18-year-old from Melton West only stepped out of the junior ranks two years ago, but quickly claimed the MX Nationals MXD crown in 2018 and rounded out a perfect year with the 125cc Junior Motocross World Championship title at Horsham.

“I went into the world juniors not expecting much, as I’d only been riding the 125 for a week,” he reflects. “In qualifying I realised I had the pace, so I went for it. That title definitely gave me a lot of confidence in my racing and helped me out with my career. It was a big achievement and there’re plenty more to come, hopefully.”

Last year he stepped up to the MX2 field in the MX Nationals riding for DPH Motorsport Husqvarna and he’s the first to admit his seventh-place series result left plenty of room for improvement, even though it was a learning year. 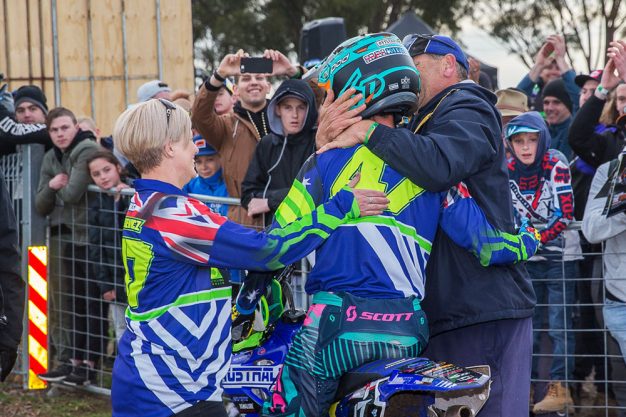 “I honestly wasn’t up to speed and in good enough shape,” Malkiewicz explains. “It took a long time to find a good setting with the bike. I finished second overall at Murray Bridge and had some good races by the end of the year, which was good. I feel if I’d raced this year I would’ve been better.”

At the same time, the teenager had a major growth spurt and, now over 190cm tall, he’s ‘hopefully’ stopped growing. Still, last year it affected his ability to get off the gate well and he had to modify his entire starting technique to compensate.

“I can’t just leave my legs dangling or they’ll get taken out by something,” he laughs. “At at the start of the year my legs were hitting the gate, so I had to work on picking them up quicker and changing my body position on the bike.”

Over the past couple of years, Malkiewicz and his dad/mechanic Steven had been working closely with Team Honda 114 Motorsports to secure a ride in the world championship. Their hard work paid off and this year he was offered a 12-month contract alongside fellow Australian Nathan Crawford to race the ultra-competitive MX2 class.

Now based in the south of France, he’s lapping up the experience and the opportunity that has come his way: “It’s definitely a big step up, but I’m really enjoying it and believe we can go somewhere with this.

“Nato and I live next door to each other and it makes it easier having another Aussie over there with the day-to-day life stuff. I’ve also been learning a lot from him on the track, seeing what he does and where he’s better, which is helping my speed and technique as well.”

But it hasn’t all been smooth sailing as in his first pre-season race he tangled with another rider and injured his knee. Even though he was given the all clear from an MRI in France, it continues to niggle and affected his results at the opening two rounds of the season.

“I debated whether I’d even ride at Matterly Basin, but I’m glad we did, just for the experience,” he says. “I didn’t score any points, but just being out there racing a sick track with all the fans was amazing.” In the second round at Valkenswaard, he put in a couple of good finishes to place 14th overall and take home some valuable points, despite minimal bike time as he tried to let his knee heal.

But then the coronavirus pandemic swept through and paused the entire championship and race program. While it’s a huge disruption, it’s been a blessing in disguise for Malkiewicz as he works through his knee injury back home.

“I’m waiting to get a second MRI while I’m back in Australia, as it still doesn’t feel right,” he admits. “I suspect it’s the MCL, but I don’t know if it’s just stretched and has fluid around it, or if it’s slightly torn.”

As for the decision to return home, rather than ride out the COVID-19 storm in Europe, he says it was a no-brainer: “Coming home was the best decision. Yeah, I had to spend two weeks in quarantine, but that’s a lot better than spending two months in lockdown where you can barely leave your apartment.

“I’m through that quarantine now and can get back into training, riding and doing everything we need to get my body ready for when the championship resumes. Once we know when we’re restarting, we’ll return and get back into a proper schedule, but for now it feels like we’ve gone into another off-season.”

As for his 2020 goals, Malkiewicz is aiming for a couple of podiums and a solid finish in the championship standings, then build some momentum and confidence for another attack in 2021.