MX Nationals season to be delayed until Conondale in late June

Outdoors and AUS Supercross to be squeezed into second half of 2020. 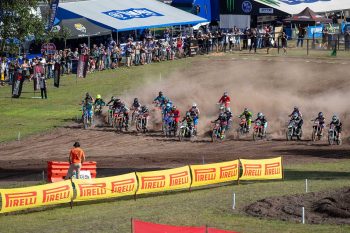 The start of the 2020 MXstore MX Nationals is near certain to be delayed until mid-year when the Conondale round is scheduled to be hosted in Queensland on 28 June.

Latest information from Motorcycling Australia (MA) on the COVID-19 pandemic indicates that Newry and Gympie are the latest national events to be postponed.

It was initially announced that Horsham’s opening two double-header rounds scheduled for 4-5 April were postponed, however, it’s now been confirmed that both Newry and Gympie will also be affected as a result of coronavirus.

Information on the status of those three events postponed isn’t anticipated until mid-April, with the trio now set to take place in the ‘second half of 2020’ following the traditional mid-season break, making Conondale round one of the season. Further revisions could be made if the crisis continues to escalate into the coming months.

Outdoor gatherings in Australia are currently limited to fewer than 500 people, with indoor gatherings reduced further to 100 people with added restrictions in place. It’s understood that Williams Event Management’s (WEM) Kevin Williams will provide further details on the series postponements next week.

These latest MX Nationals calendar adjustments will make for a tight schedule with all nine rounds – six events – to be fit in across three months prior to the beginning of the Australian Supercross Championship, which is pencilled in for the first weekend of October.

An updated supercross calendar has been circulated throughout the industry in recent weeks and listed as ‘confidential’ prior to the growing coronavirus fears, with series organisers AUS SX Holdings yet to make the intended dates or states public information. Round promoters or venues are yet to disclosed.

This most recent draft calendar is vastly different to the provisional one initially included in MA’s national events calendar last November and modified since. It also suggests that New Zealand’s S-X Open Auckland round won’t be part of the AUS Supercross series if it does in fact continue.

The supercross schedule includes rounds in Queensland, Western Australia, South Australia, New South Wales and Victoria over a two-month span through October and November. It remains unclear if it will be altered due to COVID-19 and when it is eventually formalised.